His name is Anton Dudley, and he wrote one of the plays that had a reading in Pittsburgh as part of the "Momentum Festival" when I was there. It is called "The Shadow Sparrow" and I loved it fiercely.

He had another idea that we were working on today. In his apartment he's got beautiful marionettes he's collected from all over the world... So when I got home, I looked for "chou chou" my French Poodle marionette. I had forgotten her until now. My mother saved her and had sent her on to me many years ago. There she was, In perfect shape, her little legs move perfectly back and forth. When you make her sit, she can wag her perfect tail.

When i was six, my family moved to London. My father was a journalist for the Christian Science Monitor and so we were to be there for a couple years, as he ran the Amercian News desk. "Chou Chou" was a reward, an enticement, an exotic gift to make the transition a little smoother.

It was rocky at first. The girls made fun of my accent, but I had "chou chou," and as soon as I had perfected my "british" I was in. London was where I began my love affair with ballet; that led to full-fledged dancing until I was 29 when got a record deal and had to quit all my companies and get on the bus.

"Chou Chou" and a "book" i wrote called "motor mouse" and my ability to pull off a british accent are the only things that survived from the London years. 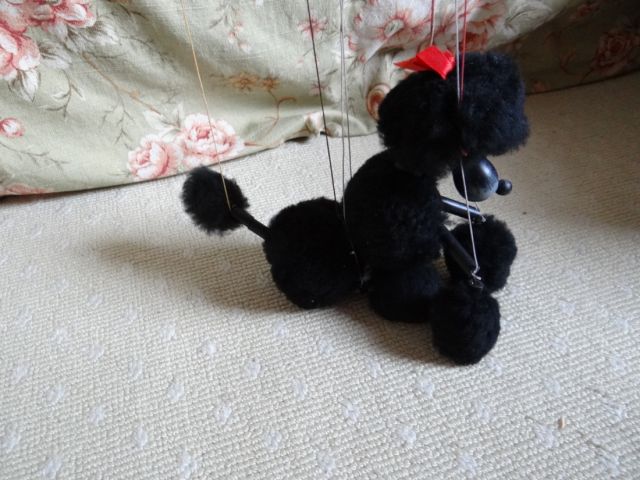