journal
my dreams do not despair

My mother has started to transpose a line from one of her own poems  "My Dreams do not Despair"  into her daily monologue. It used to be:

"Old women, we all know, don't want more books to read, just a hand to hold that holds right back assuring memories are real."

Sometimes I wonder when she originally wrote this. I have always called her from wherever I've been in the world, but I've always had a twinge of guilt for being so far, knowing how lonely she was, even before the dementia started to isolate her further. And I did send her books. Mary Oliver poems,  Adrienne Rich. I tried to interest her in some of my favorite fiction. Sooner or later the books would end up re-wrapped and given back. Mom always thought it was so funny to re-gift things.  Even ten years ago, she was uninterested in engaging in anything new. Now that I am with her every day, she is still convinced she never sees me. "Oh, maybe once every couple of months,"she'll concede, "but that's not enough. It's not like living with you." 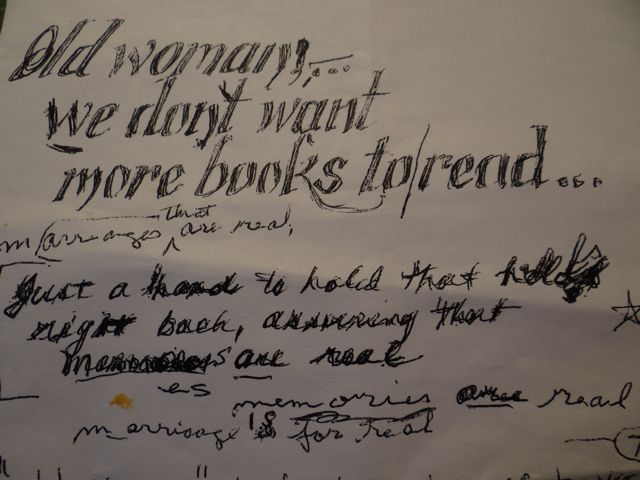 One of my caregivers has written mom's poem out in multiple kinds of text. She is looking for the right font for her next tattoo. (Right now she's got some cool stars, a red bow on each elbow, nice "hello kitty' on one shoulder and zombie "hello kitty' on the other) I'm sure there are more that we can't see.

But mom now carries this tattered piece of paper with her at all times. We've found it tucked in her pockets, her underpants -

Two weeks ago, she woke up thinking she had dreamed it. She wanted to know if I though it was any good.

"It went something like this" she told me; "Old women don't want more books to read, just a hand to hold while they're trying to read."

I told her I thought it was really great, that it reminded me of one of her poems.

Last week, it changed a little: she would pull the paper out of her pocket for the umpteenth time and ask me what I thought, maybe she could use it in her new book, but she wasn't sure whose it was. No amount of explaining made sense to her. I couldn't convince her she had written it. "No, I don't think that's one of mine, but maybe we can use it anyway," she insisted.

This week she is convinced she is dying. "Believe me, I wish it weren't true," tears are streaming down her face,"But I'm not long for this world." She is telling us 20, thirty times a day, "Look sweetheart, let's be realistic. I don't know how old I am, 97? (this number changes with each telling) but no one lives for ever. And old women don't want more books to read, just a hand to hold while they are passing on."

I don't think she's going any time soon. She is strong as a bull. But she is starting to be fearful of even getting up at all. Dr. D tried to explain: "Imagine every time you turn your head, or walk through a door, or even stand up, everything is new, foreign. You wake up and you're in Morocco, walk to the bathroom? Mexico. Front hall? Dubai. It is terrifying all the time. And little by little the brain cells are just not connecting. Nothing is making sense.

For my mom, I think losing her words has to be the worst torture. She has so loved her poetry, her particular kind of word play. She has such a rich vocabulary. And still corrects our grammar, - (that's automatic!) But imagine everything that made sense yesterday being gibberish today. She is angry and lost. No map, no GPS, no guide. Sometimes the only thing that helps is holding her hand and staring deep into her eyes. "Are you REALLY Jonatha?" she'll say. "Yes, mom, I'm really Jonatha." 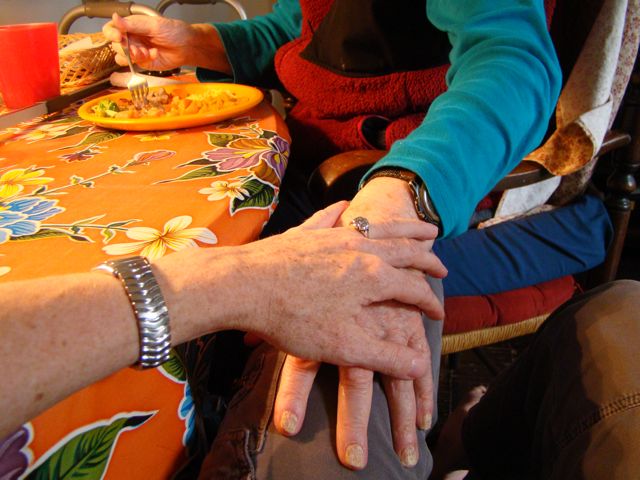 My dreams do not despair

Never intending to give up, I'll take the remnants

that trims the globe or even grassy ranges that were once

for buffalo. It's not too late. Most things will be apparent on the way.

The world consists of rumors after all; where we perform the

arabesques of joy, shy poetry that tells of love as if it was

a constellation in the sky.

Old women, we all know, don't want more books to read but just a

hand to hold that holds right back assuring memories are real.