My mother and I are connected in haunting layers and undeniable synchronicities. I told her I was going to write some songs yesterday, and she immediately said, "I think I've written some songs too." "Well, then we'll have to sing them together later, and compare" I said.

mom: "First I'll have to finish my new book which is called 'Mothers and Mums' - you know my mother played the piano so beautifully, everyone in the neighborhood would come over and beg her to play for them. She was also always 'doing' for other people. Wondering how she could help out with those less fortunate than herself. Amelia Catherine Behrhorst Stone. And she really had a terrible time putting up with my father, because he could be awful. But she never complained."

These strains and ties and molecular connections and instincts. Take care of your own. Stiff upper lip. Always a smile. Keep on Keeping on. Mom hasn't written anything new in such a long time - well, she'll write about her pain, 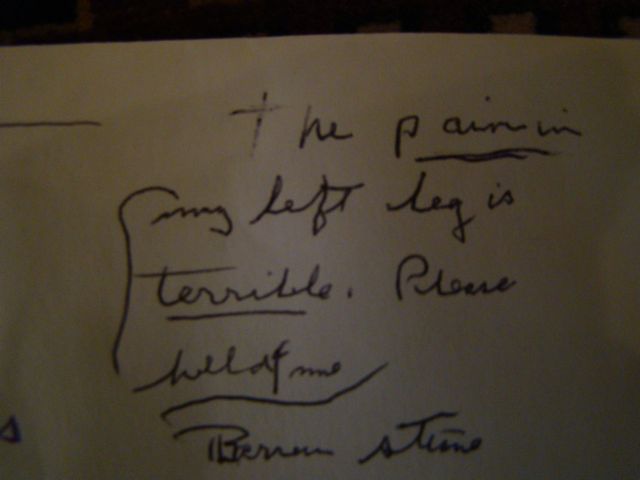 which breaks my heart. But we are doing the best we can, - this pain conversation seems to be her new default when she is confused and afraid.

Yesterday I found a sweet one liner about Amelia. 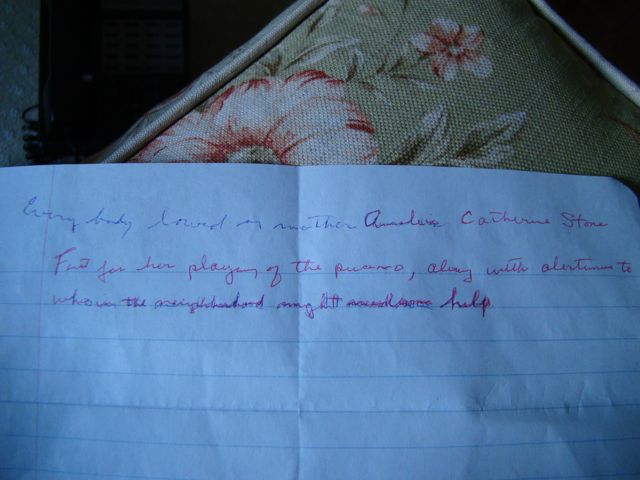 Some days she will spend the entire afternoon addressing an envelope over and over to my brother. It turns into some kind of brute art. I actually cherish these pieces.

At the end of almost every conversation we have, she will say, "You know, we should make a play out of this, we could make a lot of money!! Are you writing this down?" And I have to say, "Yes mom, that's a great idea, every word!" Because I suppose I am writing my own "Mothers and Mums." Stolid and whimsical as she explained herself to Dr. D. She has been so many different people since I've known her...and now we are the play within the play.