journal
Back to my roots

It's true, it's soon, plane leaves tomorrow. And no matter how many times I hit the road, packing is a nightmare. How many shoes? How cold, how many sweaters. It just never gets easier. Will they steal my knitting needles at Heathrow again?

I've been doing interviews today with press in the UK and Ireland. Oh my. So exciting.

And my brother has sent me our family history... it's true, my great great grandfather is in the records in Glasgow. I'm sure I've got cousins in Aberdeen for goodness sake. 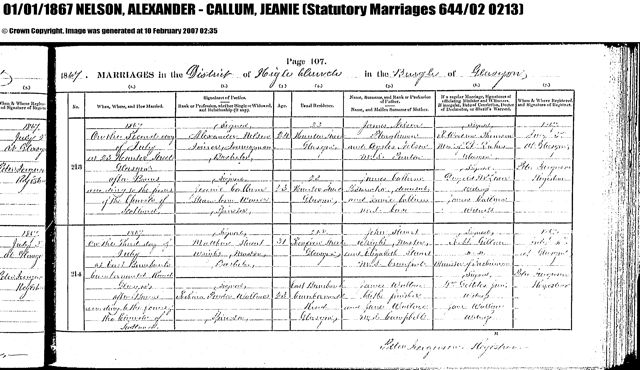 According to Todd, (and this is part of the very long story of why he plays the bagpipes) On July 2, at 23 Hunter St. in Glasgow Scotland, Alexander Neilson, a journeyman joiner, and Jeanie Callum, listed simply as "spinster" in the record, were married by Rev. Woodrow Thompson of St. Luke's Church. Alexander was 24 years old, son of Agnes and James Neilson, Ploughman. Jeanie was 23, one of the eight children of James Callum, shoemaker, and M. S. Cave. Soon after their marriage, they emigrated to Toronto, eventually settling in Erie county, New York. They had a son, James, who had a son Robert, who named his son Robert, who named his son Todd.

Every couple of years Todd and I talk about how to get him playing the pipes on a record of mine. It's really just a matter of time and the right tune. Maybe I'll finally write a good one while I'm traipsing the rugged moors!