journal
Maine, the way life should be

When I was ten, I got a scholarship to go to summer camp in Maine. It was on "Long Lake" near Harrison. My cabin was called "Cozy Cottage" and my counselors were the coolest women I'd ever met. They both played guitar, and taught me my first chords. (One of them ended up singing and playing fiddle and guitar with John Mellencamp and the HOOTERS!) The other had long shiny black hair, was a killer water skier and tennis player, painted, could embroider ANYTHING, and I basically followed her around like a little golden retriever puppy. I wanted to be just like her.

The other kids called me "Mason" because they said I looked like Mason Reese, the kid with the Joan of Arc hair and the terrible lisp that was on the canned smorgasbord commercials. She would comfort me and tell me that I was just ahead of my time. "Just lace up your high tops and go, you've got the goods."

I wrote home week after week, telling my brothers about this incredible woman with the long black hair. (My brothers are six and eight years older than I.)
"One of you has to marry her," I would say. "It's just that simple."

My mother became the camp's director during my third year there. She hired both my brothers to work at camp "Newfound."

My middle brother became the assistant to Jody, the head cook. My oldest brother led all the trips out into the mountains of Maine and New Hampshire. Well, there's a recipe for romance.
To make a now very long story short, my older brother DID marry her. He was still a junior in college. She had just graduated. They've been married now for 30 years. They still crack each other up, challenge each other, LOVE each other. I ADORE my nieces and nephew, and my sister in law is my oldest, dearest friend.

Funny  how she seemed so mysterious and grown-up and romantic, and yet, she always listened. I could confide in her and she took me seriously. Even after she and my brother fell in love, I never got shut out. I felt cool in their company. I still do, and she still cracks ME up wicked bad.

My brother just sent me this photo from the summer they got together.
It's just like the signs on the Maine Turnpike say: "Maine, the way life should be." 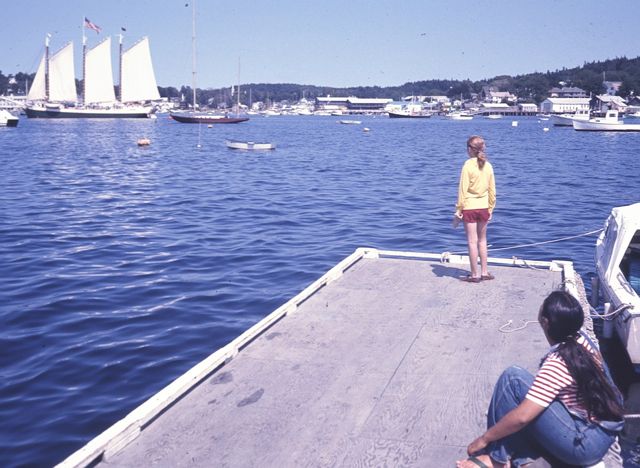