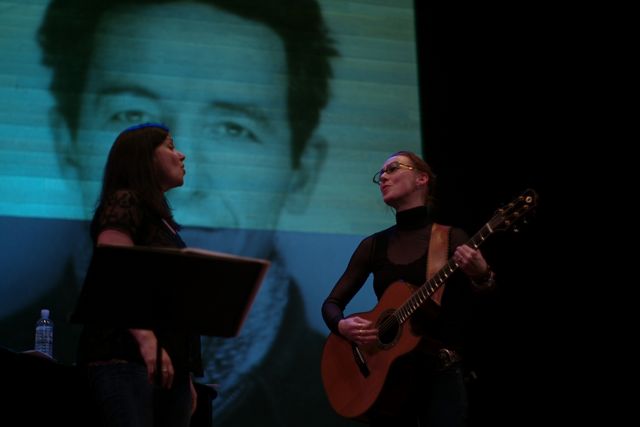 The Rubin Museum, with Tim McHenry at the helm, puts on this series called Naked Soul. These are concerts in a tiny little hall, 150 seats max. The idea is to find ways to relate what you do with the art in the museum, and build the set list around that.

There is no amplification, no bells, whistles. It's the artist and her tools (guitar and piano for me) whatever images you choose to project, and a rapt, pin-drop quiet audience. Because of the setting, and I think because of the unorthodox way it SOUNDS, there is this intimacy that is enthralling, exposing, thrilling. People listen in a whole new way.

This is the second time I've performed for the series and it was another top ten experience for me. I remember the first time I did the show, I was close to tears a few times during the concert. I started seeing/hearing my songs in a totally different way. Re-contextualizing them in relation to the buddhist art was mind-blowing. I felt connected to a personal kind of faith I hadn't felt in ages. Love and an intoxicating electricity of emotion and soul.

This time was very different but equally exciting. Tim introduced me to a Tibetan monk (Drukpa Kunley) "the divine madaman" who had spent a lot of time in Bhutan. He was an enlightened master, and an exponent of "crazy wisdom." He was basically a troubadour, raconteur. Loved the women, loved the drink, carried a little banjo like instrument along with him, his stories, and of course his "divine thunderbolt of wisdom." His thunderbolt penetrated the mysteries of life, as it did the many willing virgins who were his groupies. It kinda sounds like he was a big part of populating Bhutan with his tantric Buddhism. Anyway, there are penises decorating many of the temples in his honor, and this guy is considered a saint. Now there's a religion I like. There are great stories about fornication and copious drinking interspersed with his teachings on how to square your karma, escape the cycle of birth, death and rebirth (samsara) and attain nirvana.  According to one source, the god-fearing but high-living Drukpa Kunley sums up his philosophy in this way:

"The best chung wine lies at the bottom of the pail/ And happiness lies below the navel."

Well, the beauty of the evening was that Woody Guthrie had so many things in common with rev. Kunley!! Some of the things I found in the Guthrie archives when I was working on my record were downright erotic/pornographic, much like the bawdiest stories I found in my Bhutanese history book! And Woody didn't shy away from the drink, or preaching about his beliefs either. One of my favorite quotes is the one I included in "All Ya Gotta Do is Touch Me:"

"I full aim to get my soul known again, as the maniac, the saint, the sinner, the drinker, the thinker, the queer. I am the works, the whole works, and it's not til you have called me all of these names, that I feel satisfied. SATISFIED!"

And another little gem I lifted and shared last night:

"And I will stay here in you and through you and all here about you till your eyes have closed the the sights of both of us and see only yonder prettier lights which light up the plains and hills in the lands of creation. And let me be man enough to stay here in you till your whole spirit is satisfied and your soul comes down to rest again here where I'm holding you."

Well, I don't know about you but I certainly found some crazy wisdom in what these two had to say.

With names like Woody and Kunley, they had to be good.

Thanks so much to Tim McHenry and the Rubin, and all who came to share last evening with me. I am so honored to keep learning along the way.