Sometimes when I want to summon all of my girl power, I wear ALL my necklaces at once. Well, last night was one of those nights. There is just something inspiring about knowing the women that made all of these beauties. And imagining that they are right there with me in spirit when I'm on stage offering up my songs. 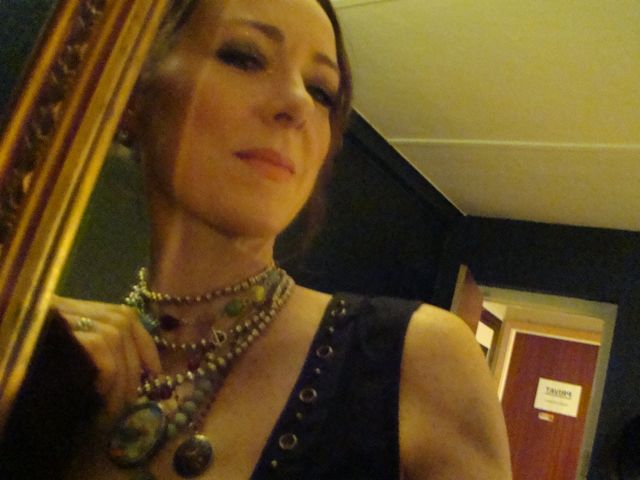 Andrea Scher, of course made the multi-colored vintage bead one. Nina Bagley, the light blue stone mixed with the resin charm that says "I will fly." The sock monkey ÃÂcameo' with the crimson vintage bead detail is a Mati Rose creation. The tiny delicate turquoise and ruby strands with the brazilian medallion were made by another fabulous creature, Eileen that I met at the Squam Art Workshops last September... She just gave it to me after I admired it at the end of the weekend!  The pearls are by a British designer I met at the B and B I stay at in London, and I can't even remember her name right now, but we totally hit it off, and I HAD to have a piece of that energy!

When I was most nervous at the Montreux Jazz Festival last summer opening for Paul Simon, I wore my super Serenity Medallion necklace made by FabianyFelipe, I have another gorgeous one by Georgia Cranston 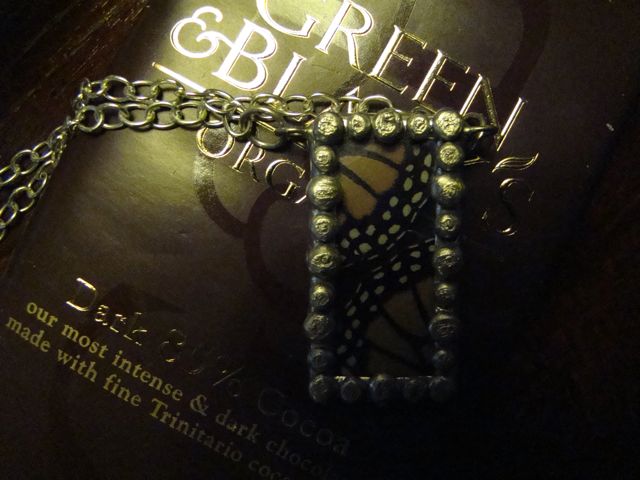 that gets equal air time It was inspired by "ten cent wings," and has monarch butterfly wings beautifully ensconced in glass and silver.

I travel so much, that I'm constantly finding treasures that will forever remind me of where I've been. 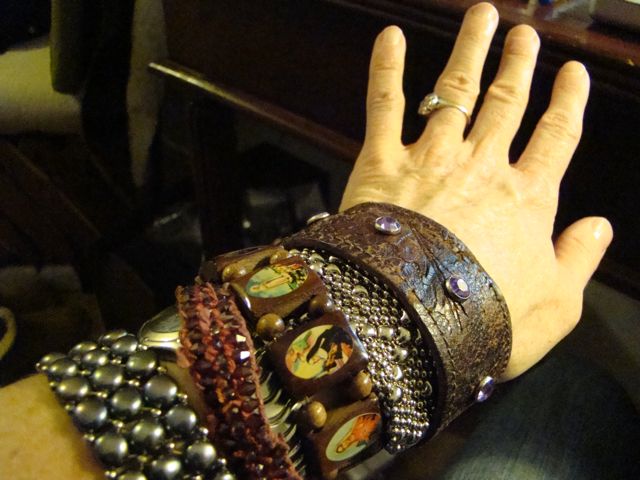 My bracelets are my travelogue. The Catholic saints, weirdly enough I had been looking for obsessively after I saw a little kid in my neighborhood wearing the same one. Well I ended up in Copenhagen the week after I'd seen it, and they had the same bracelet in a trendy boutique. You probably get them for fifty cents in Guatemala. But it seemed like destiny to me! The little garnet one is from my favorite beloved store in Seattle, ALHAMBRA. I've been wearing it for twelve years now. The meshy silver was a gift from a friend in Eugene, Oregon, the silver pearls, a train station bargain in DC. The leather cuff, another gift.... Maybe I'm obsessive but it's like comfort food to me. Little trinkets that take on their own lucky charm.

Well, they served me well in Odense. I had another beautifully intense and unforgettable workshop. 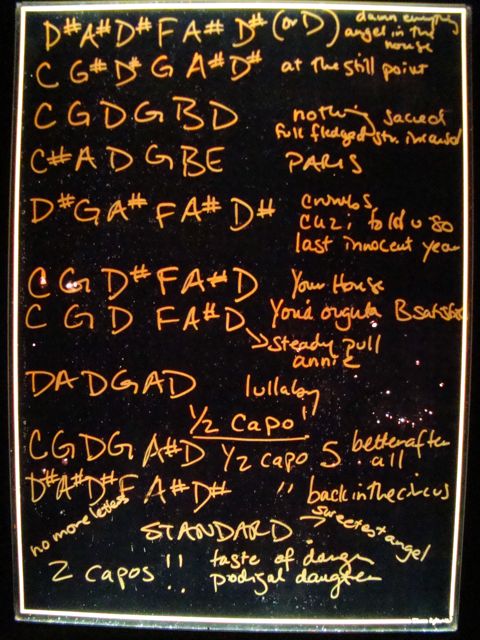 I am constantly amazed at what I learn about my own process when I'm forced to organize myself to talk about it. It makes me want to run back to my room and write some more songs. And I'm ever grateful to the curiosity and appetite of the musicians who participate. Some of the questions really help me figure out where I've been and where I might be headed.

And I know we're ALL working at what we do, so I don't take for granted the generosity of the crowd! So, THANK YOU.

The gig last night, well, right up there with Copenhagen. 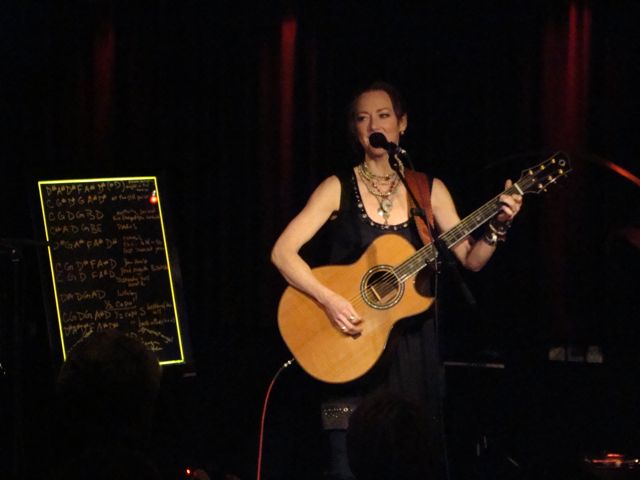 we kept the tuning board on the stage for the show! 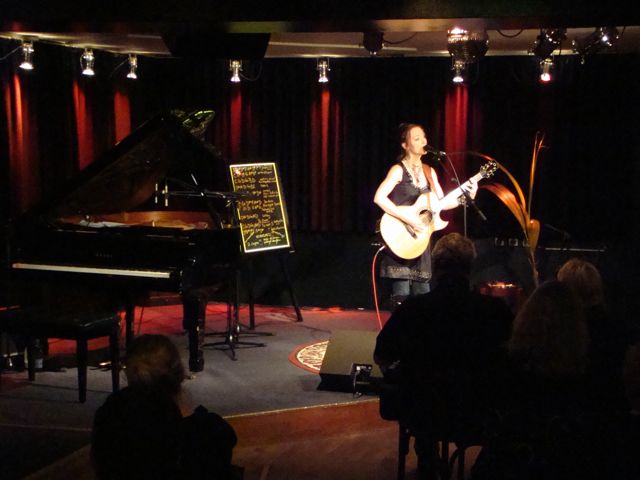 And of course the coconut plant came too. I'ts holding up pretty well considering the stress of the road. I guess it likes the music. 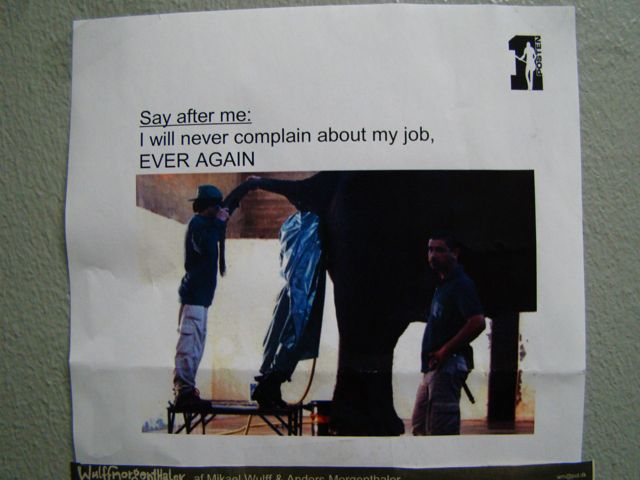 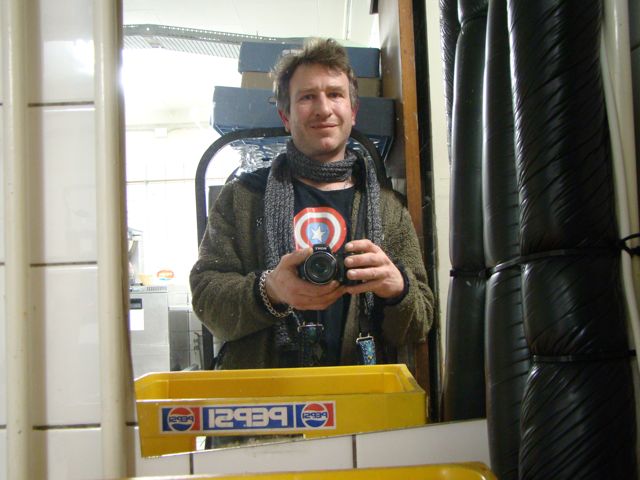 Now he's getting into the self portrait...

All to say, I am GRATEFUL. this has been a truly incredible week in Denmark. I can't wait for the Danish Folk Awards Tomorrow. I'm so honored to be invited to sing a couple of songs.