journal
Careful - love in many cities

It's been quite a week. Very exciting and reassuring. It's true, there ARE still people buying records! This is me and George Knight from WBOS. His show is awesome. But the coolest thing is that I've known him since 5th grade. We were in Mrs. Sklut's class at the Woodland School in Weston, Ma. He used to flirt with me by telling me all about 18 wheelers and steamshovels. So romantic. I did a little drive by visit on the eve of the release of"Careful What You Wish For." It was wacky good fun. 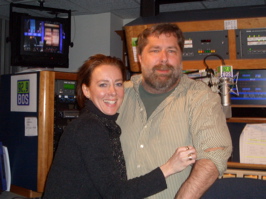 Then over to WUMB the next morning. It's almost their 25th anniversary. (Congratulations) And we go waaaaay back. It was really great to see so many old friends and chat and play. Thanks to Brian Quinn for threading me through the UMASS maze to get to the studio! And thanks to Dave and Dick for lovely, thought provoking interviews. Always a treat. 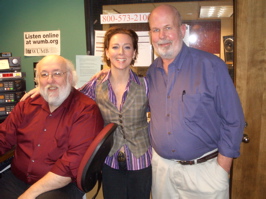 Dave Palmater, me and Dick Pleasants

Then it was over to Comcast for a little stint on the Barry Nolan show. I know him from way back too. He's a Boston classic. The lovely Bessie Tsionis did the interview. 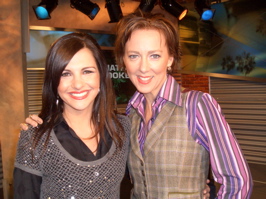 Later that evening I flew off to Chicago for the State St. Borders in-store the next day. Of course it was ten below and snowing on April 4th. That's always fun when you've packed for spring. I desperately searched through all the Easter pastel camisole nothings and straw hats for a sweater to ward off the wind. Luckily found the last one in the city (wearing it below) for 90% off. Many thanks to the lovelies at Cole Haan!! Brrrr. 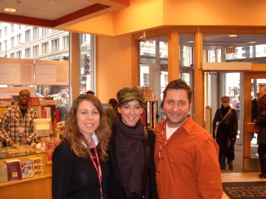 Laurie Smith, Jonatha and Ken Nylen at the Chicago Borders.

There's no rest for the promotionally minded! We then trekked off to Ann Arbor, where it was even windier and colder and the drive from the airport was into blinding snow squalls. Oh, the glamorous life.

Martin Bandyke! from WFMT hosted the in-store and it was also broadcast live. Love Martin, love the hat, love Ann Arbor. (Of course I made my pilgrimage to Zingerman's to stalk up on exotic chocolate and decadent sandwiches.) 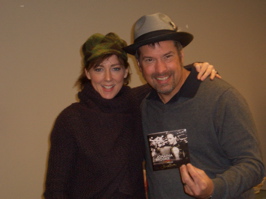 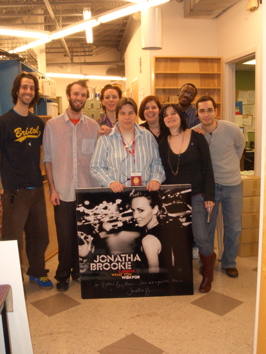 And many thanks to Val and the Borders team. Nice poster, huh?

Then, it was off to Philly for big JBro Friday. I started out at ten at ten TV where it was action packed live television. There were salsa dancers, yummy dessert cooking recipes, and a wraparound audience. There's not a lot that's more nerve racking than twenty-five people watching your butt while you're performing. As I left the stage, one woman behind me asked me where I got my jeans. I guess the song made a big impact!! And there were tv monitors everywhere so you just couldn't escape seeing all the bad hair angles. Live is Live. You can't take it back.

We blew out of there and had half an hour to get to WXPN and set up for the live at noon show. Luckily no traffic jam en route. Well, Philly knocked me out again. Amazing, party audience. I just had a blast, and for once, didn't swear by mistake and get in trouble on live radio. Thank you WXPN, Bruce, Michaela, David Dye, Dan Reed for an incredible day. The highlight of course was singing "I'll Leave the Light On" and "After the Tears" with the one and only Eric Bazilian. He makes me feel like such a rock star. And you should all know the Hooters are working on their comeback record. It will ROCK.

We finished the day with a more intimate show at the Borders store in Bryn Mawr.
I think Pumperer 123 was there and will be posting a link to better pictures than I got! We're also going to set up a links section on the tour page so all the live broadcast things can be in one place. Coming soon!

Saturday we drove up to Boston. No more snow, but still too bitter cold for Easter weekend. I met one of my youngest fans there at Newbury Comics in Natick, actually couldn't get her to talk until right before she had to leave. I hope I'm not that imtimidating!!

Many many thanks to Dana Marshall and WBOS for hosting and supporting the in-store. 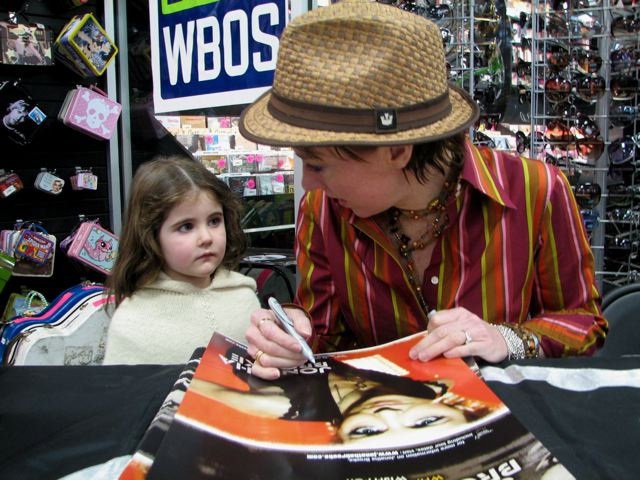 Of course I found a new hat there. I had to keep up with Martin Bandyke!! And it was another bad hair day.

All to say.... it's always a thrill for me to meet the people that help me do what I do. Your stories and support mean so much to me. So thank you for a wonderful week, for your kind words and your purchases.

Off to Portland and Seattle. Come say HI!

p.s. absolutely in love with the new Mika record.