I went to the non-commercial radio event of the year in Louisville, Kentucky last weekend. I got to hear Charlie Louvin on Saturday night and I am completely smitten. His perfect songs, his saucy perfect banter, his lovely perfect band. he blew everyone else out of the water. When he introduced his drummer, he told the audience he was the lady killer of the group. Then he stopped and thought for a minute and said "Well actually he just cripples 'em so's I have a chance to catch 'em."

I went to get my picture taken with him after the show (first time ever) and he said, "I sure hope this picture doesn't come out so's I can keep on holding you." 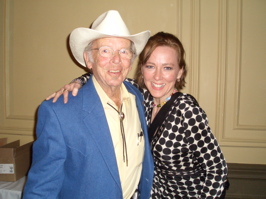 Got his new record too, and I'm diggin' it.

But the weekend started Friday with the WFPK live listener lunch. What a great station! they bring people in, give them cool, fancy sandwiches and we get to play. Martin Sexton was there too, chanelling big gospel choirs and crazy old timey voices. He really is incredible. Don't miss his new record "Seeds." And many thanks to everyone at WFPK for the interview and show. I'll be back in Louisville May 30th with the band to rock out their Waterfront Wednesday concert series. Gran Bel Fisher will be there too and he's slamming!

I also caught up with my old pal Barbara Dacey from the Martha's Vineyard radio station, WMVY. We did a little interview and I recorded a few songs. It's so nice to see people thriving year after year. 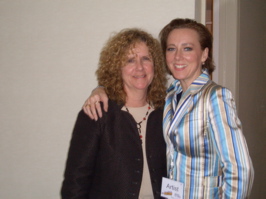 I did a little schmoozy performance later that afternoon where, of course, I was last and the sound system completely fritzed out in the middle of my four song set. So I just did "Linger" acoustically in the room. Who needs all them bells and whistles!

Luckily, my friends Mike Visceglia, Ben Butler and Jeremy Morrison were there egging me on. Mike and Ben play with Suzanne Vega. She's got a new record coming soon. Can't wait, I'm a big fan. 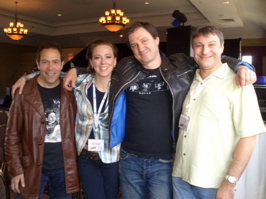 My pals Andrea and John were in Louisville hanging out too, and we had way too much dessert and other debauchery. Can you eat that much chocolate and live to tell?? 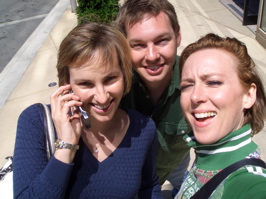 I also got to visit the most excellent ever record store "Ear Xtacy" and do a little performance there. Some young baby cried almost louder than I could sing all through the french song "Je n'peux pas te Plaire". I know how she felt but, really, it turned almost comical after a while. She kept hiding in this rack of t-shirts so no one could grab her and shut her up. Andrea almost peed her pants laughing. In- stores are great because they're in the day time and kids can actually come for once, but.....

My newest fan behaved like a CHAMP. Andrea gave him the mohawk. 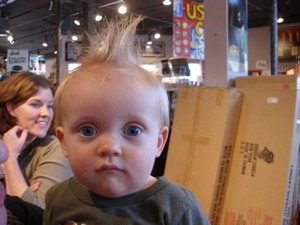 Altogether a wicked fun weekend. Sorry to those we may have inconvenienced by postponing the Madison and Minneapolis dates. We just need a little more radio support and a few more butts in the seats to make those a success. But we'll do those in the fall. The dates are already up on the tour page. As always, it never hurts to check on concerts. Club owners, promoters and artists lead complicated, logistically crazy lives.

I put "War" back up on myspace as a free download. I got tired of keeping quiet again. The weird backlash last time was pretty depressing, but what are ya gonna do, curl up and die? I'm so impressed that Jimmy Carter just got up and told the truth. We all need to do more of that.

On a lighter note, the botanical garden here in Central Park is bursting with new stuff every week. The scents and sights are intoxicating. Spring/summer is/are finally taking hold. There is hope on smaller scales.

All the best to you all,
see you out there.