So much has happened, so many cities, so little time. It's about time for an update. But it might be a long one. We came across so many beloved people on the road. I had to include them all. Friends, fans, fundraisers, FUNraisers. Louisville rocked our world AGAIN, Denmark and the Musician's Union treated me to an incredible day, Paul, Duncan and the band made every day a party on the west coast swing. Just a few quickies to get started: 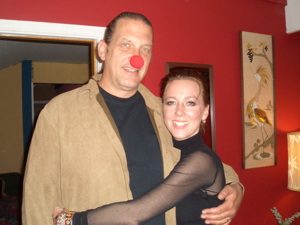 Me and beloved Paul 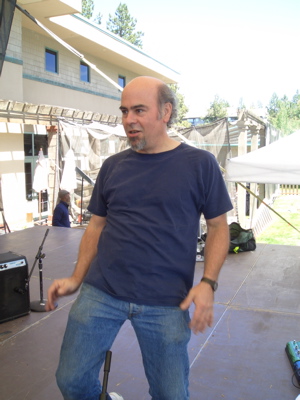 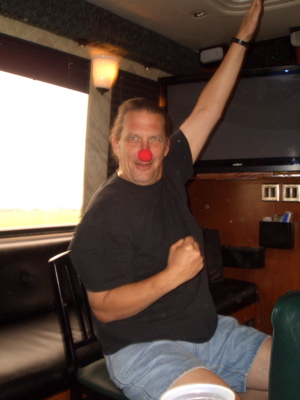 Paul does Flashdance, the bus version 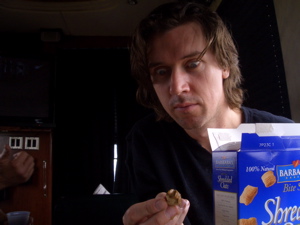 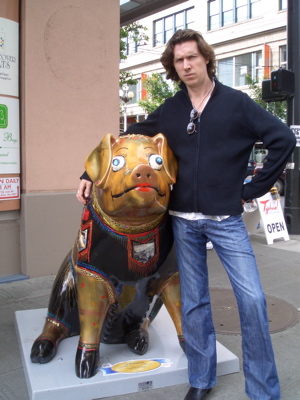 So here goes. We left off In Louisville. (still a-flutter over Charlie Louvin) And came back a week later with the BAND. Goffrey's gear never showed up but he rocked it up anyway. 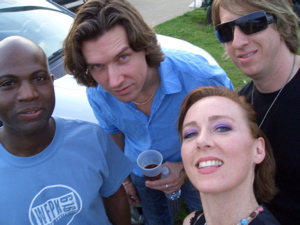 So much love in that town. What a great radio station WFPK is. Lovely, intelligent music-loving peeps. And the fans who turned out at Waterfront Wednesday?? OFF THE HOOK. I worked on some more hula hoping skills with an incredible hooper by the side of the stage. No pix somehow!! I wanted to buy her hoop (homemade) But how do you get a massive hula hoop in your suitcase? Or on to the flight home?? Ollie, our youngest fan was there, and our pal Big John hawked merch. YAY! 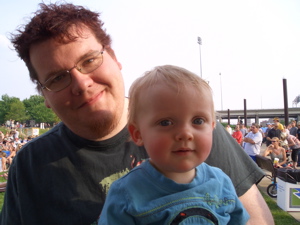 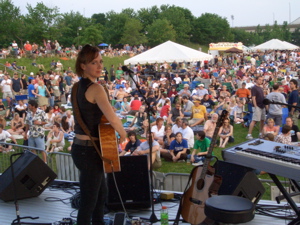 I think I left for Copenhagen again the next day. One night to recover and then the train to Aarhus for the SPOT Festival EnnaBella stage. The organizers were super sweet as the festival is usually just for Scandinavian artists. But they let me in and I felt like a little mini event. There were massive cameras in the front of this tiny tent, clicking away. And a super sweet rapt audience. Of course it was the worst hair day!! Later that evening, a Norwegian singer had to cancel her performance in the acoustic hall, so I was, last-minute, given her thirty minute set slot. Gorgeous ancient Steinway, hushed crowd again. Nice little review in Gaffa On-line. CRAZY. https://gaffa.dk/anmeldelser/view.php/mreview_id=33702

I know the other overseas peeps are a little fed up with my love affair with Denmark, but I have to go where there are opportunities, and we're just having a rough time getting any breaks in the other territories. Simple as that. Although, god bless Kim Heath, the UK is coming along!! But it's a JUNGLE out there.

Back to Copenhagen and another workshop, this time for the Musician's union. And they rocked it up big time. Full on home-cooked lunch, super reception, and this time I got to hear some of the attendees' music. I really loved being there and sharing my experiences and music. All the best to everyone who came and shared back!! 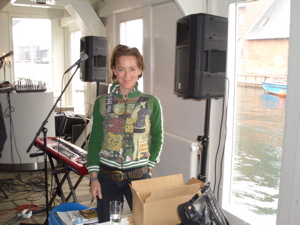 Whirlwind back to the US and then out to the West Coast to start up the band. We rehearsed a bit with Forrest Robinson who subbed for Rich on three dates. WOW and did he kick some butt. (Rich played at BONNARROOOOO with Regina Spektor) 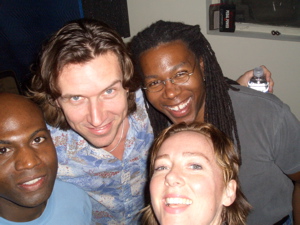 So it all started in Santa Barbara. Paul was in fine form. He and Duncan decided that the clown nose was the new IT accessory. 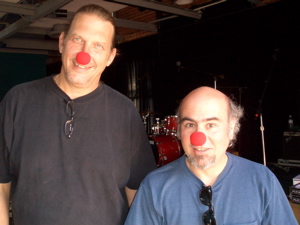 Freaked out Goffrey's daughter who came that night to her first ever concert!! But she recovered and held up like a champ. Especially when she saw that the first act had a dancer doing sort of interpretive movement in front of the stage. 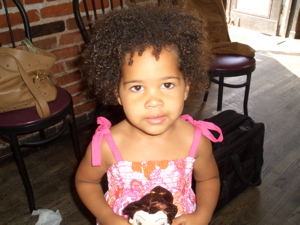 San Juan Capistrano was fun too. Great to hear and meet Molly Jensen and Mylen.
Solana Beach? What can I say, we had a super night. The audience was small but FIERCE. Thank you all for hanging. And thanks to Karen Taylor for the super acupuncture treatment. I'm still floating.

LA was pretty rocking. You never know what to expect from such an industry town. But the audience DELIVERED. Our friends from M-AUDIO were there, 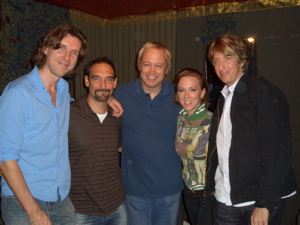 thank you sooo much for the gifts you guys.

San Fran, wow. We got to meet some super supportive fundraiser donators. 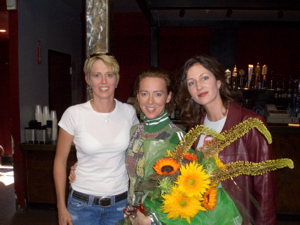 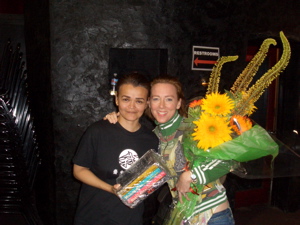 Thank you all sooo much. And thanks Diane for the gorgeous flowers and books. 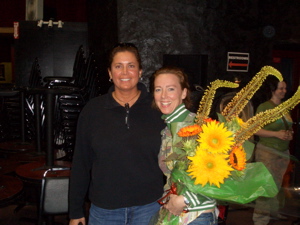 The bouquet made it all the way to Bend, OR!!

My SUPERHERO (www.superherodesigns.com) pal Andrea made it down. First big night out since having the beloved Ben. 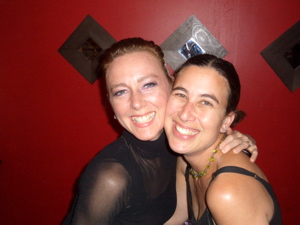 This was our first time playing the Independent, and we LOVED it. There happens to be a really great restaurant down the street called NOPA, that didn't hurt one bit. And I got to Kibbitz and dish with Andrea about the cute waiters and the scrumptious halibut.

Portland, I just have no words. I felt like a was suspended in crazy love all night. From the second we walked on stage, the audience just poured out this irrepressible energy. It all started with my new BFF Holly Resnick. 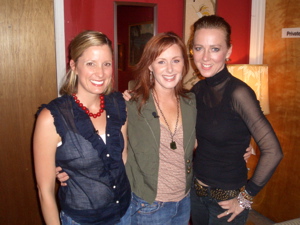 Marni, Holly and me
(www.hollyresnick.com) She's one of the ÃÂIT-MOMS' on tv 12. Well, it turns out she really is a fan, so she and Marni, the other ÃÂIT-MOM' came to do a little segment on how to make sure you don't lose your passion for the music that you love, just because you have to listen to Hillary Duff all day with your kids. (No offense Hillary) OMG, it made my day, and I almost fell apart singing them a little bit of "So Much Mine" backstage. I mean these girls are in the trenches, but they're still wicked hot 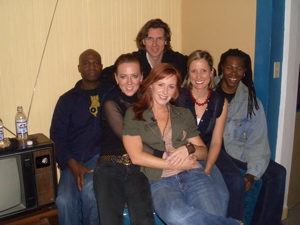 (ummmmmmmmm my band was completely tongue-tied-infatuated) and so energetic and buoyant and FUN. Thank you Holly. The show just went up from there. No words.

Bend, Oregon, I swear the drive there made me fantasize about becoming a mountain woman if this music thing doesn't work out. It really is the most gorgeous territory ever. And Bend is a magic town, with magic beautiful wholesome people. I think I fell in love with everyone in the autograph line. Forrest gave his drum sticks to a little brother and sister and we both signed them, and I swear they were just over the moon. That and this little girl dancing away with her father ( I think her name was Savannah), and a girl named Katie who was all decked out and soooo happening, just made my night. Thanks to all who braved the chilly temps and stayed for the whole thing.

We also got to hang a little with the bartenders and other people from the KILLER restaurant, Scanlon's at the Athletic Club. Gotta say, we have NEVER been fed so well and so much in one day. Thank you so much for the hospitality and love. And sharing the wine and chocolate was a treat for us too. It's usually back on the bus and skedaddle. I hope we can come back really SOON. 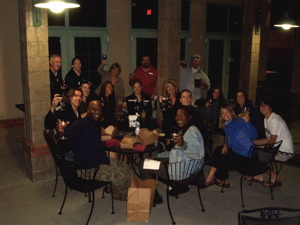 Cheers
So the bus left around 11pm, and everyone but me drove back through the night to LA. I had to get to New York, so I stayed over and flew in the morning. Well I thought I'd be home that night. Uh UH!! Puddle jumper made it to Portland OK, but then 5 hours late, we finally left for Chicago (ok shame on me for not booking a direct flight to NY in JUNE, thunder storm month of the year.) Anyway, I got stuck with gazillions of disgruntled travelers in Chicago, a lot of them just slept on the floor at the airport. I found a hotel and crashed, but my band made it home way before I did. A whole day before. So much for air travel. It's really more and more of a joke. But I should probably go on about that in the PET PEEVE section of the board!

Sorry we've had to postpone some shows. June has just been dismal for ticket sales for a lot of peopleÃÂ. Even Kelly Clarkson had to cancel her tour! So where is everyone? Come to mention it record sales are slow too. I know we haven't been getting much press so I feel like no one really knows there's a new record. It's really frustrating. Where are the 100,000 people that bought the other records? What's going on here? We're ready and willing and working our butts off. Any ideas how to help are welcome!! As you know it's me, Pat and Stephanie at Bad Dog, so we can use all the help we can get.

And as always, thanks for your support. See you out there. And London here I come!!

p.s. we're working on some more dates in Germany, perhaps Holland and Belgium for the fall, hopefully right after the next Denmark swing. More soon.