Christmas was simple this year. Big on Love, low key on gifty craziness. 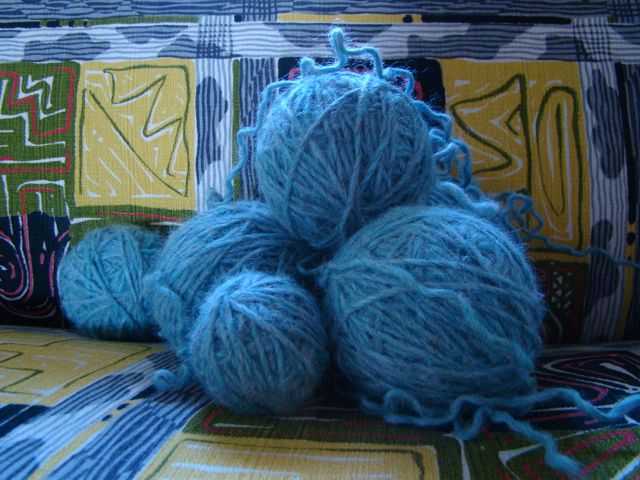 And I know there was some dissent on the blue sweater conundrum. But I couldn't leave it alone. And so, I started over. 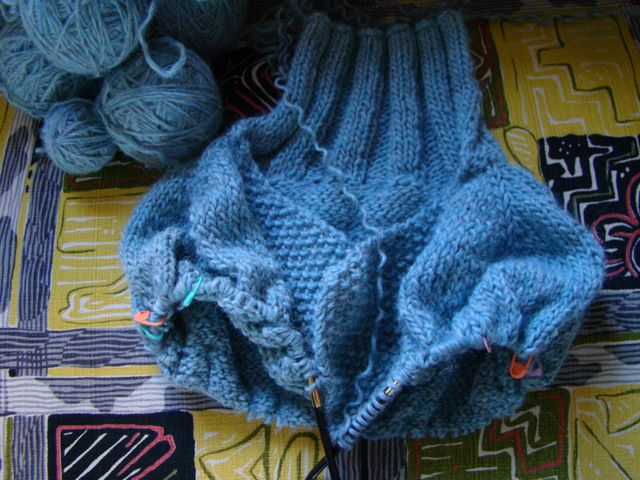 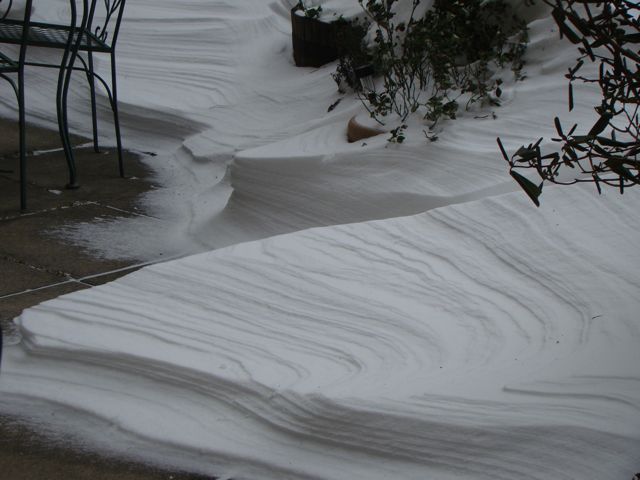 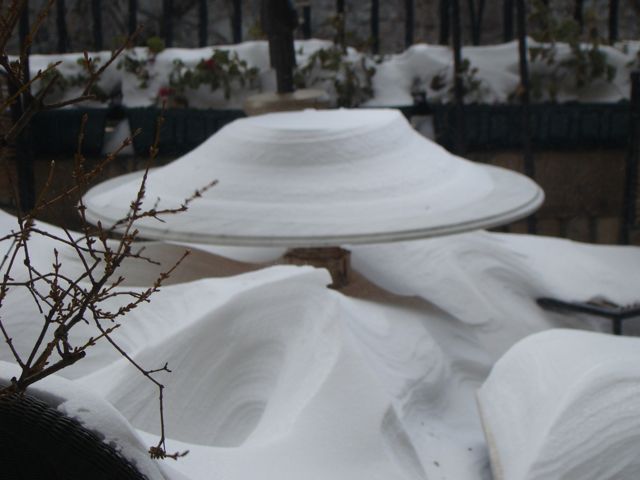 The wind created a little flying saucer out of the summer coffee table. 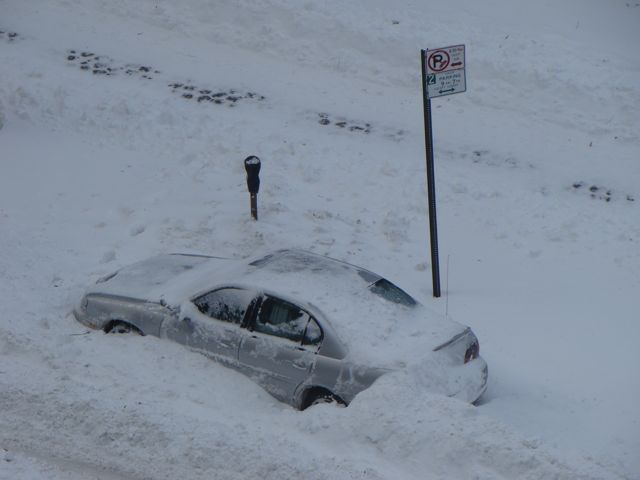 Julie went out to make snow angels. My coat is the best for the wind, but.... of course she is TINY and kept tripping on it. 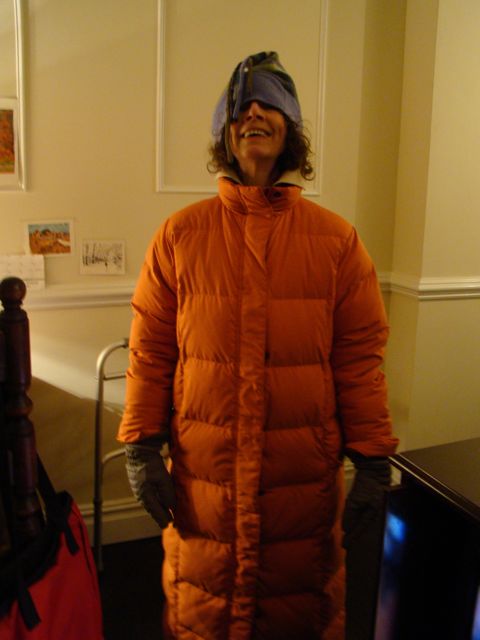 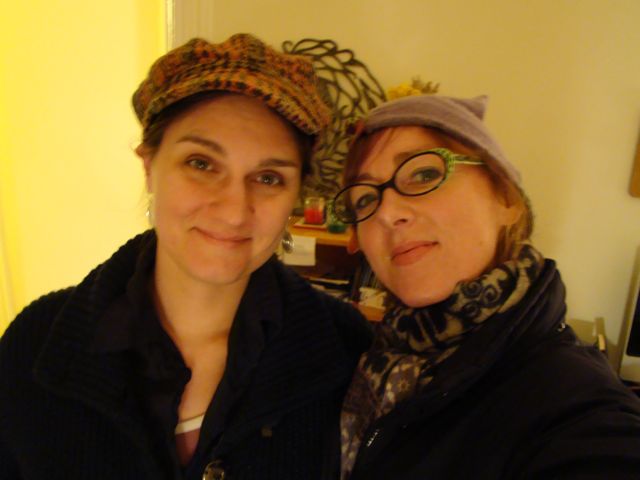 Luckily I made it out to Brooklyn before the snow shut the city down. I got to hang out and work on a song with the lovely Madeleine Peyroux.

On the way, a gorgeous mosaic 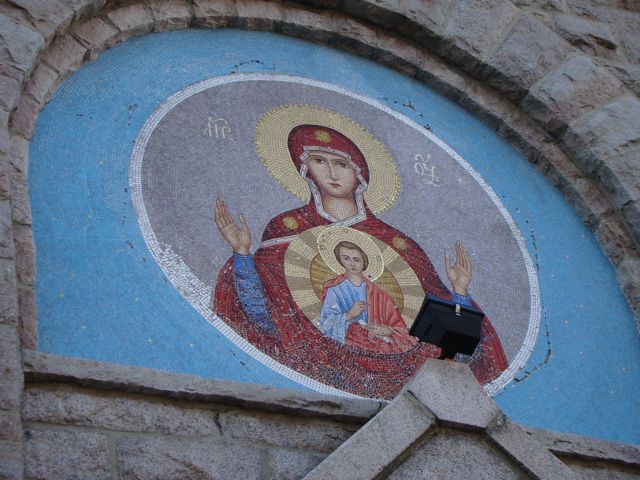 and, sadly, a lost pink suitcase. I wonder who left it here. 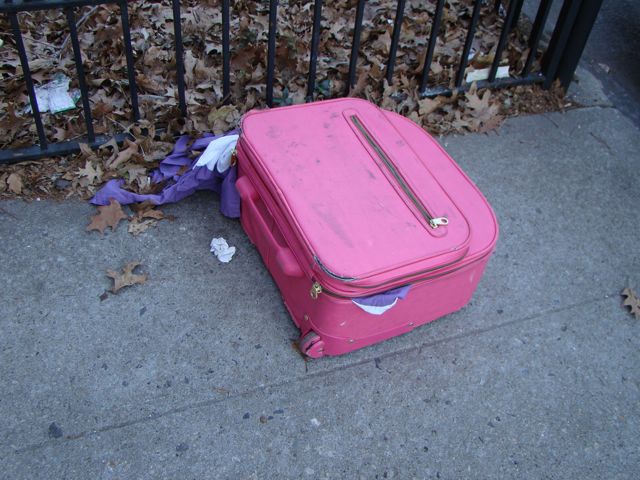 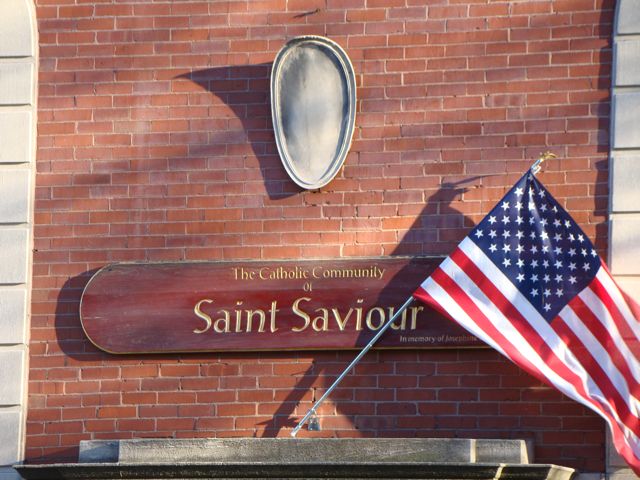 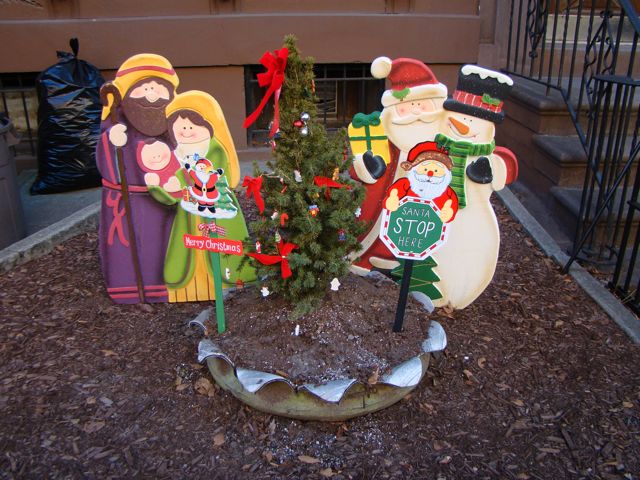 Or, Santa. He did stop by and leave mom a new magnifying glass. The handle is a really cool snake! 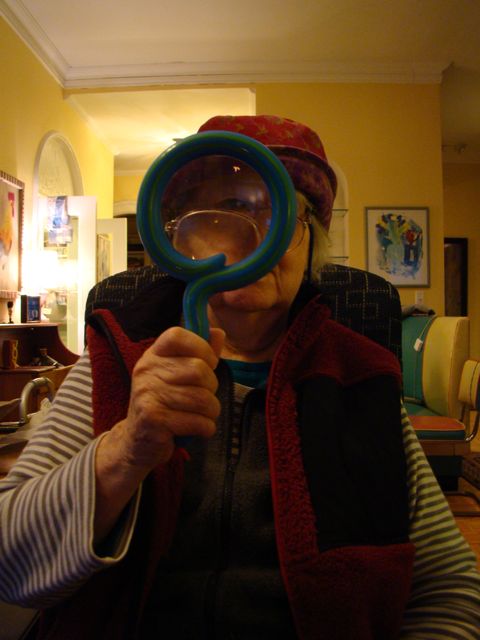 Mom can't decide if it's a mirror or not.

Got a fabulous dose of family love yesterday, it's been way too long since we were all together... 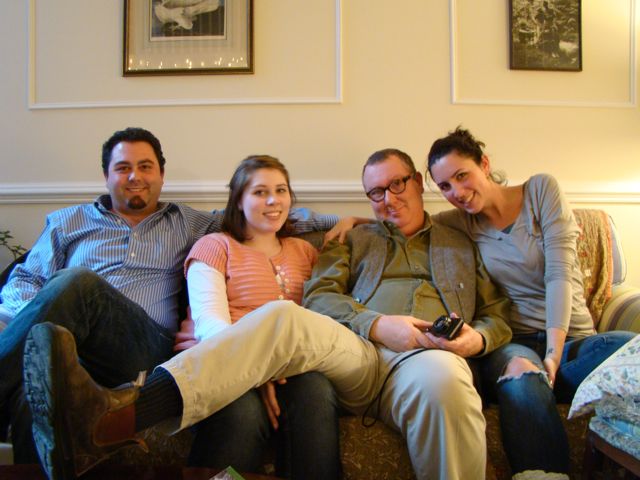 Nothing better than that. (and some chocolate chip cookies.)

When we can get mom to actually get up and walk on that new knee, we often end up cajoling her with silly hats and impromptu performances to distract her from how mad she is at having to exercise. Luckily it's given us lots of choices for holiday greetings. 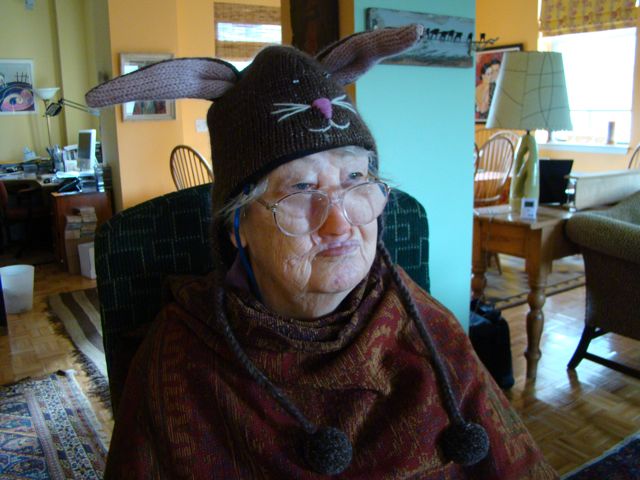 In other news, I have accomplished some more knitting. I am making myself finish up my half-done projects.... and, somehow, they are all, fittingly, BLUE. 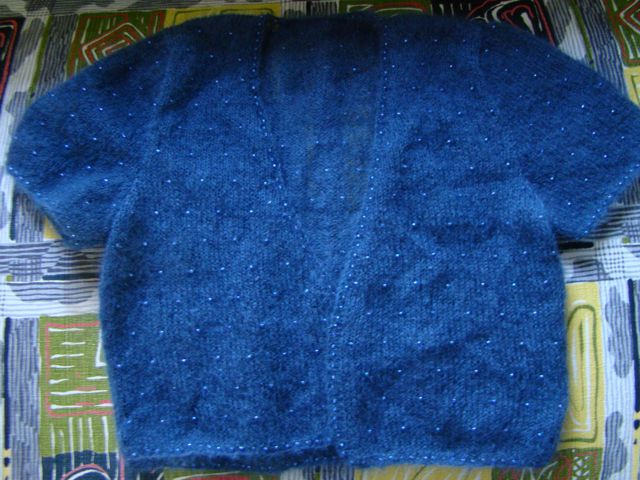 This is my FAVE. A little beaded treacle! 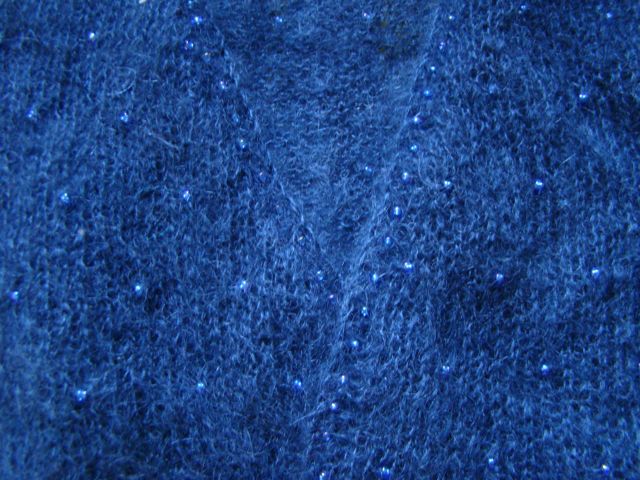 and this little all purpose wreck-around cardigan? not bad 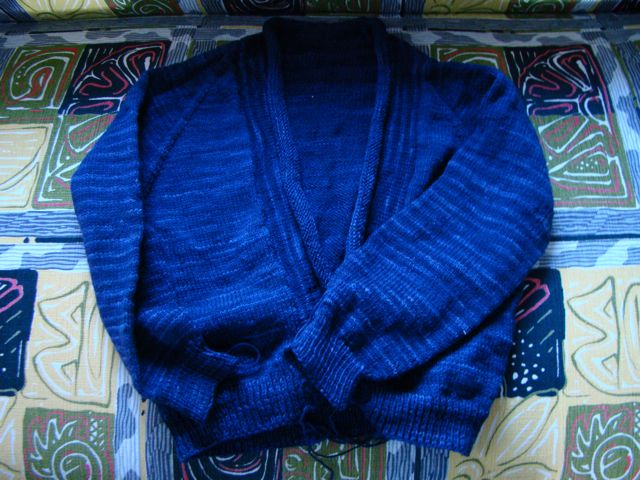 (thanks to HAPPY KNITS in Portland OR!!!)

And then there's the "re-started three times, drove me crazy for a year and I still hate it" BEHEEMOTH! 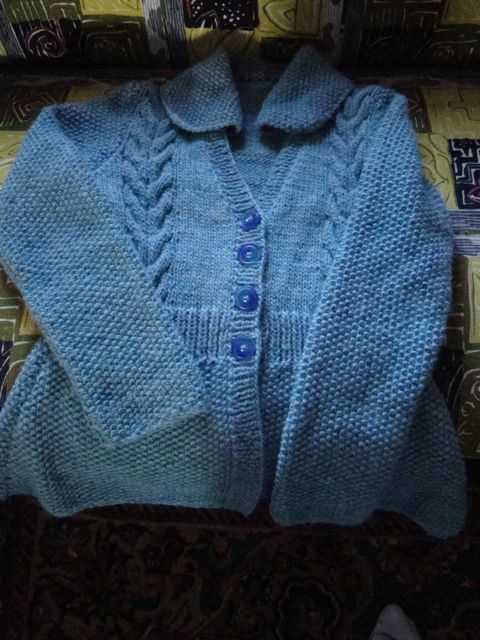 But in the words of MEATLOAF, "two out of three ain't bad." 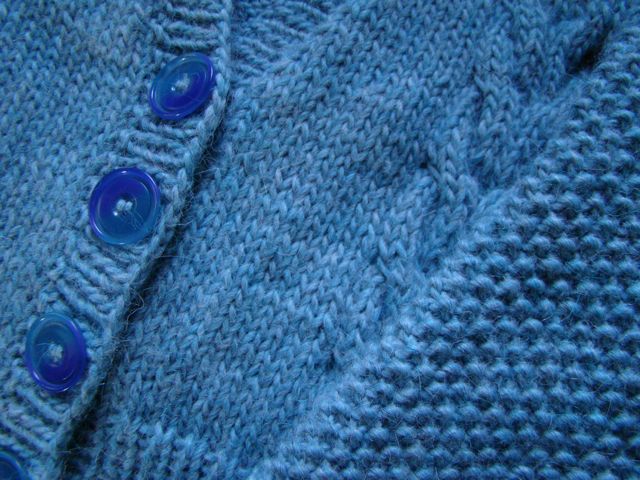 There's just something a little too earnest about it. Dare I say outdated? Little house on the prairie-ish?

I'm gonna rip it out and make something someone might actually WEAR!!!

Meanwhile, happy holidays. And don't forget your hat, it's COLD out there. 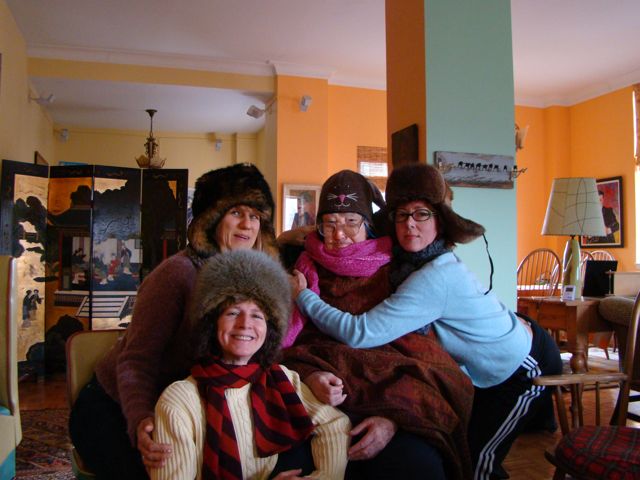 Usually, it's hard luck around my subway stop. A lot of heartbreaking stories. You don't even have to ask. It's written in lined angry faces, a tired slow pace. 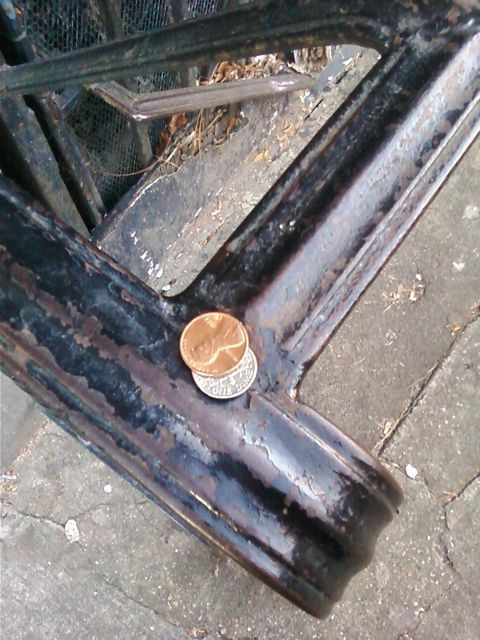 Yesterday, on the railing right outside I was struck by the change someone left. Did they see it on the ground and think someone might miss it and come back for it? Did they purposely put it on the railing to see what would happen? Was there some social experiment going on? A hidden camera to follow eleven cents on its way?

Later last night, the money was gone. I was trying to get somewhere in a hurry at rush hour and of course the whole line had been shut down by some emergency down town. I decided, rather than stress, be late, run like a madwoman to get to my appointment, nah, maybe it's time to turn around, slow down, go home. There really was no way to get there from here in the time that remained after 15 minutes on a grounded 6 train.

Not sure what it has to do with anything except, things are finally settling into some kind of rhythm here. I actually feel like singing and recording again. Caregiving has been a full time job for the past few months...but there is a light somewhere in the tunnel. And I'm gonna find it. Inspiration, and charity, just in time for the holidays! 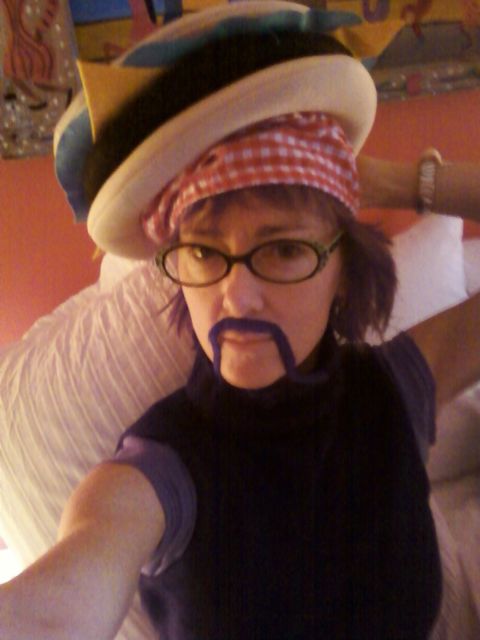 And, nothing beats a new hat and mustache!!!

I beat out Tom Petty, the Sick Puppies, and Bachman and Turner.  I rock!!!

When I first moved back to boston after college, i had a beat up diesel rabbit, (that's a car...) a shared one bedroom apartment in the south end, a bunch of tattered dance clothes, a degree in english, and a major passion for writing and singing songs. I was a cleaning lady, I was a nanny ("so much mine") I painted houses, moved furniture, whatever I could do so that I could keep dancing and sending out cassette tapes to see if Jennifer and I could get some gigs.

Anyway, I still remember driving around town, from nanny gig to rehearsal with the Danny Sloan Dance Co. to cleaning someone's apartment. Sometimes I would actually have to pull over so I could really listen to the voice that enchanted and gave me hope and desire and comfort. It was Dick Pleasants. He had the folk radio show on WGBH. He had that calm and knowing warmth. In those days I just hoped i would be lucky enough to ever be on his show, or even just meet him. I was always knocked out by the new things he would discover and share. And then, sure enough he championed me and Jennifer in our early "Story" days, and has been an incredible friend and supporter ever since.

Well, all this to say. A bunch of us are getting together to throw a party/concert/shebang to honor Dick Pleasants and benefit WUMB which is where his voice resides now. Kind of a 'right back atcha...' There are not many people who have done more for the buskers and bangers in Boston over the years. Dick has the voice and heart and soul I will always love and respect.

January 7th, Sanders Theatre, Cambridge, MA is the place to be. 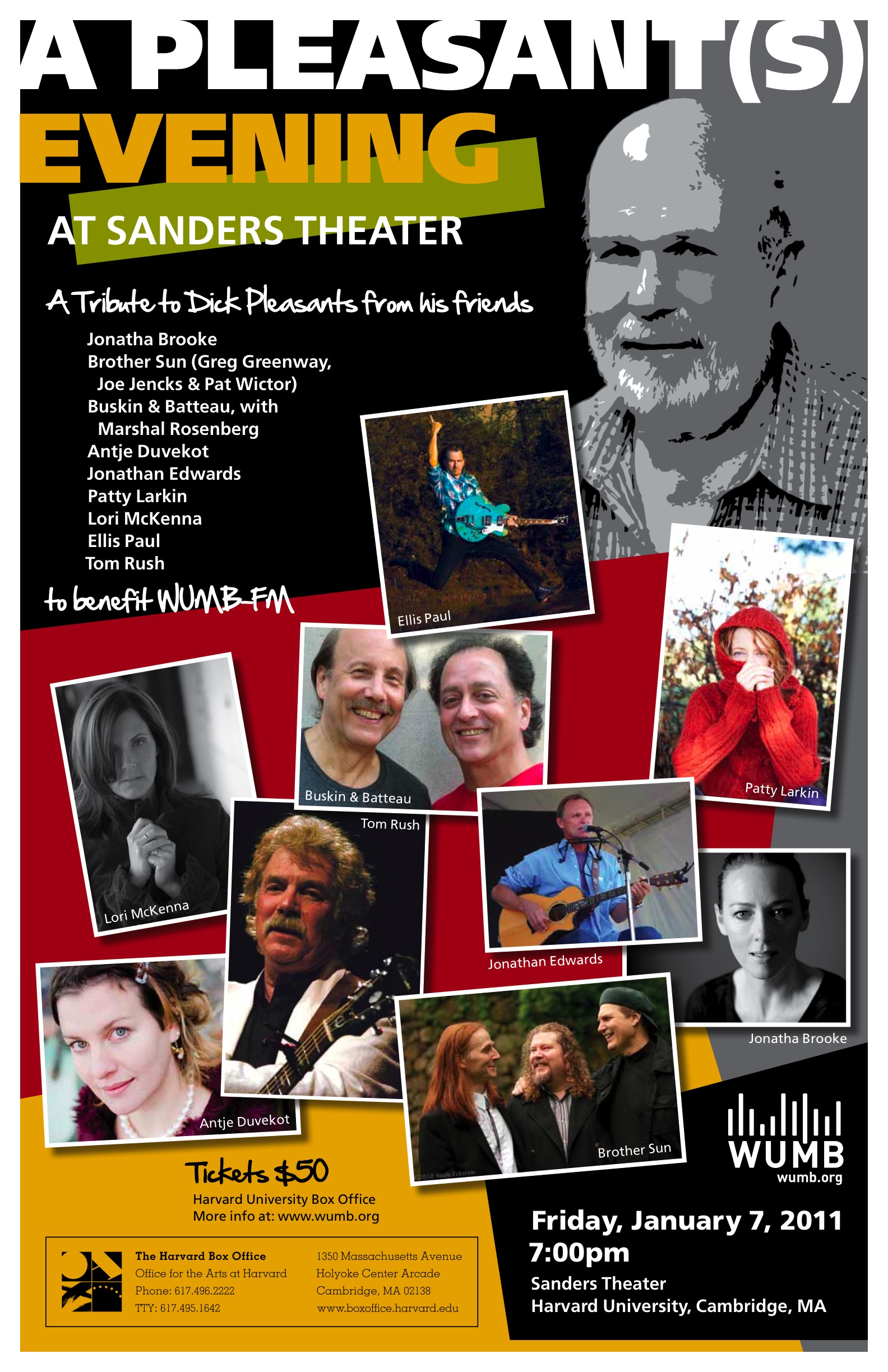 I'm working on some spandex costumes. Don't miss this one.