My sister in law Julie, brought this crazy purple wicked witch hat back from minneapolis for halloween. 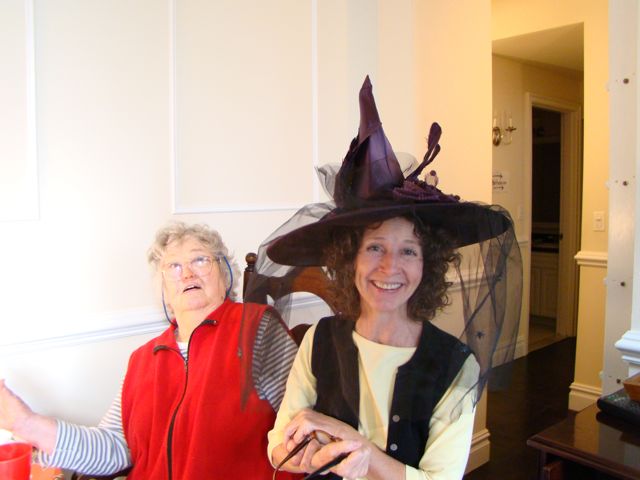 AT first we thought it was kind of silly, but now? We actually have to have a schedule so we can take turns wearing it. 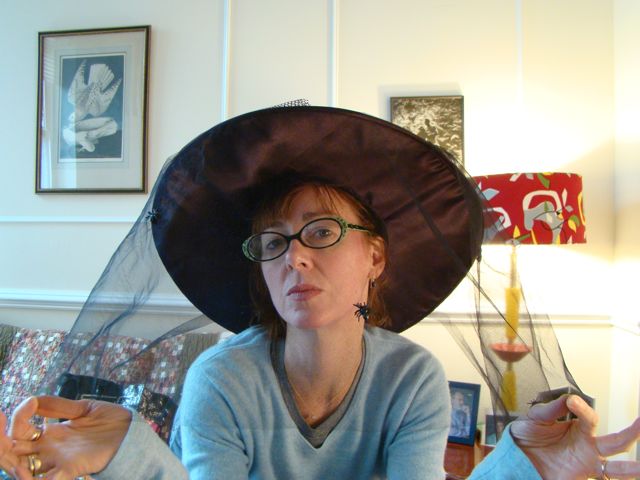 How cool is that? spiders sewn right into the mesh!!!

We have a light up pumpkin pen, wicked witch napkins, crazy looking mini pumpkins, and of course some reeses pieces in case any kids come by. It's definitely in the air here.

Even my husband relented and put on the hat 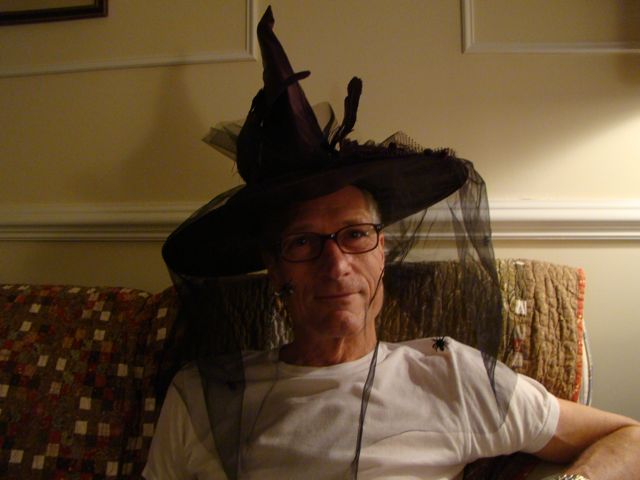 We think Stephanie looks the best. 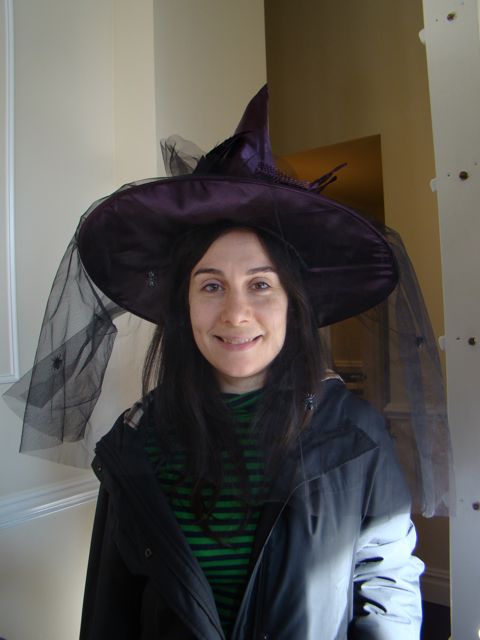 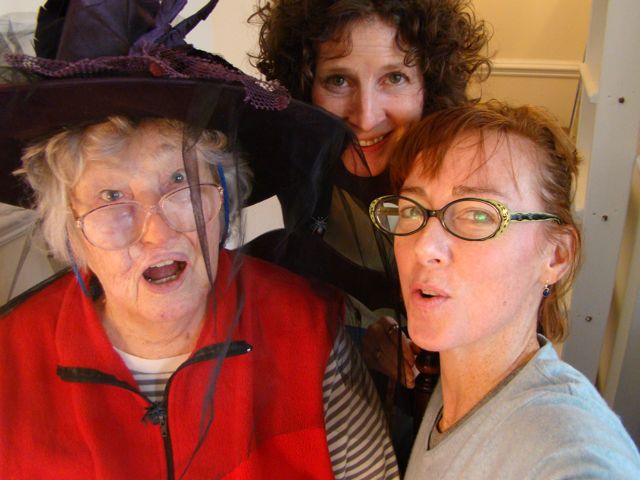 To make a great risotto, you have to have the patience of Job, the creativity of a master painter, and a really strong stirring arm.

My husband, thank god, has all three, and I live for the nights when he breaks out the special copper pot, and his old wrecked wooden spoon. Last night he cooked up one of his masterpieces; the pumpkin, sage, chestnut, bacon and a couple of secret ingredients risotto. 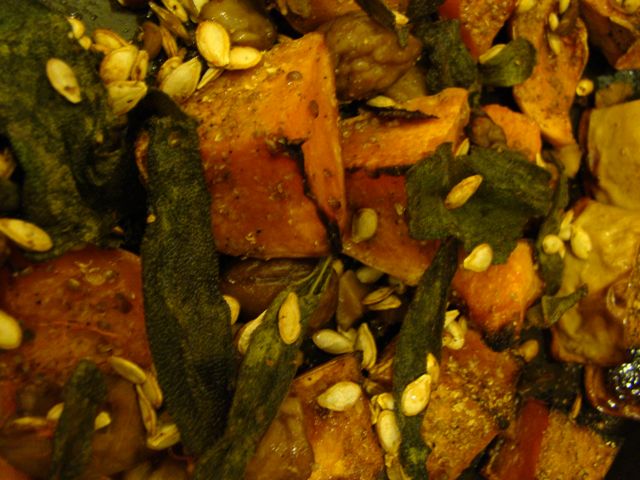 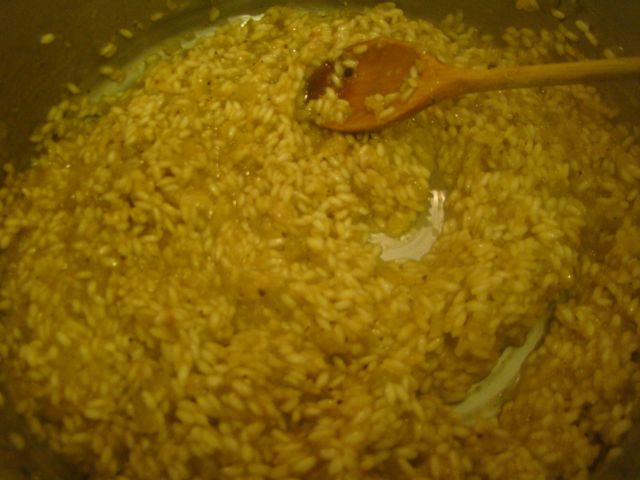 I don't know how he does it, just the time to cook down the onions is enough to put my brain in a frizz. I think it's the total absorption, the way cooking can take you away from every other care, and you have results; a yummy nurturing, nourishing, sublime, never-quite-the-same-twice creation at the end. 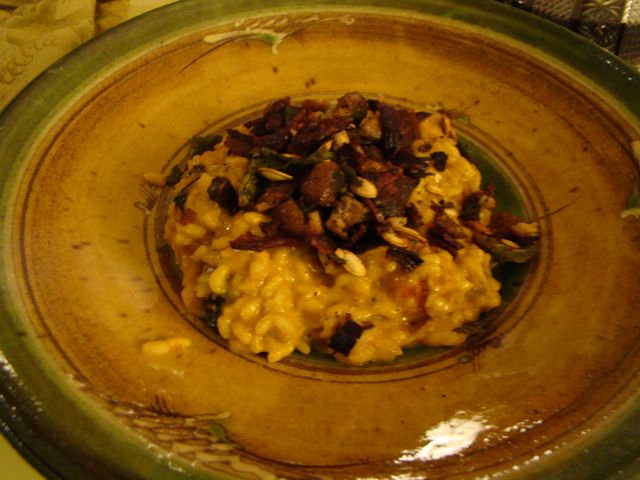 And the wine never hurts one bit either.... 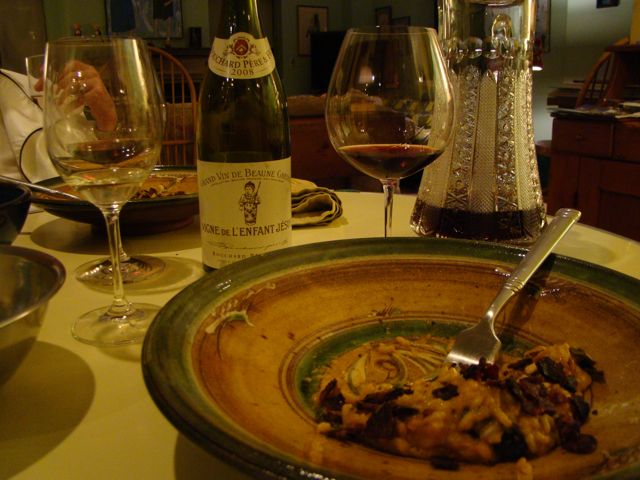 I thought the label was funny. Little baby Jesus and the vines. 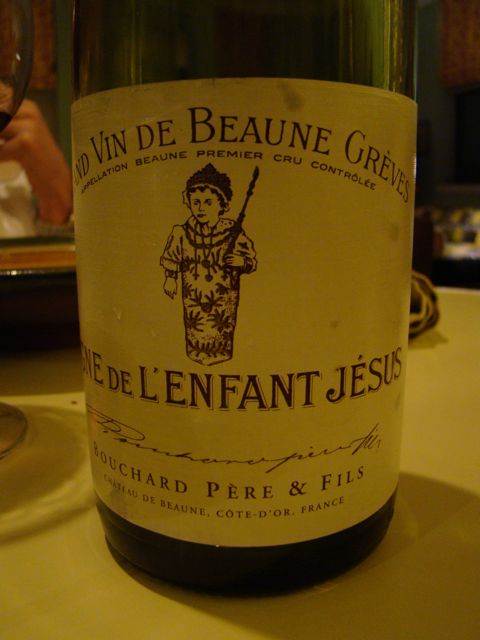 But you know, you find faith in all sorts of places! 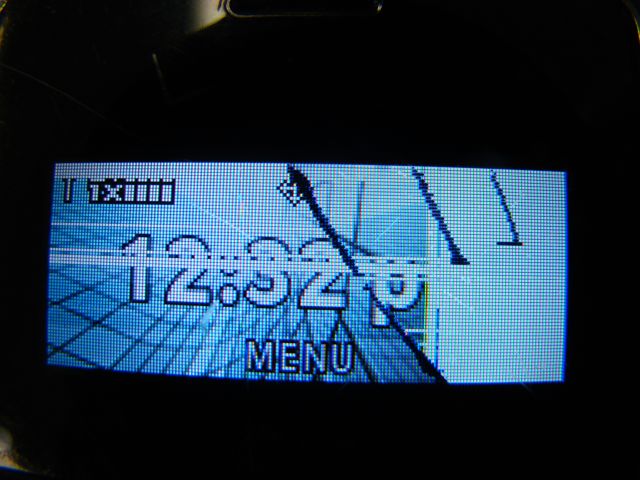 my screwed up phone

So, I digress? Of course, my PHONE, probably the last of its kind, died yesterday. And of course they are discontinuing it, and of course you can't even get a phone without paying a monthly fee for its eventual access to all the stuff I don't even WANT.

The very kind lady at Verizon shuffled me to the back of the store to show me the 'dumb phones' for people like me. (She had too much of that toxic perfumy hair conditioner in her hair.) But she was wicked nice.

I chose a pretty blue one. I hate it. But it was free because only a dummy like me would want a crappy blue phone that doesn't really DO anything! I keep dropping it because it's slippery and I have to slide the thing out to get to the letters.

In other news, I got home yesterday with a new copy of the November Christian Science Journal.... and there was a freshly published poem of my mother's. Kinda made our day. 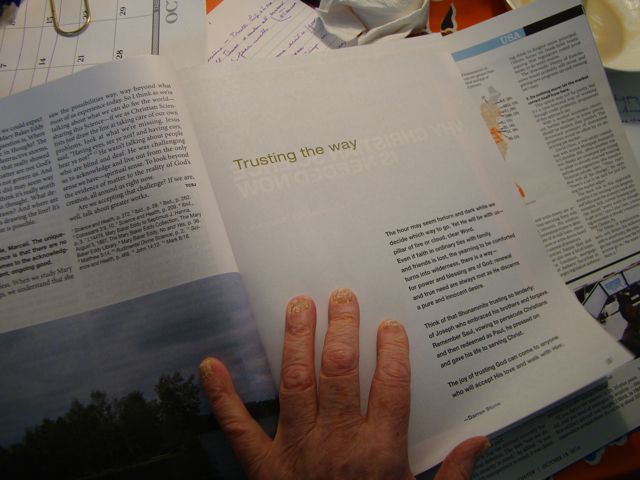 Ok I will stop being cranky. We are all doing our best. I will trust the way.

There are so many confusing things about losing your memory. I can't even imagine what it must be like for familiar things to seem foreign, for your normal command of language to disappear, for easy mobility to be a thing of the past.

My mother has such a good sense of humor, that she is really making the best of a very strange time. She loves it when my husband goads her: "Good morning, glory," he'll say. 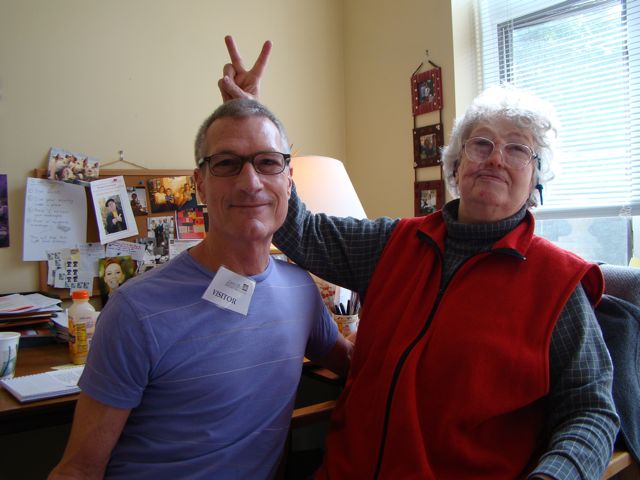 Mom: "who're you calling glory?" He'll listen as if for the first time to the same story about the new book(s) of poems she's been working on.

Mom: "It's called a potpourri of poetry. And there's another one that I'm working on called 'Always Home.'"

She's mostly recycling poems she's had in circulation for years now. But she is so engaged with them still. Tweaking little things here and there. Making ten more copies to send out again. I've been getting her poems in the mail for as long as I can remember. Lately, copies of the same ones every year. She has given poems to the dentist, the guy at her old post office, to strangers in restaurants. Amazed and touched every time, that people do love to read them. 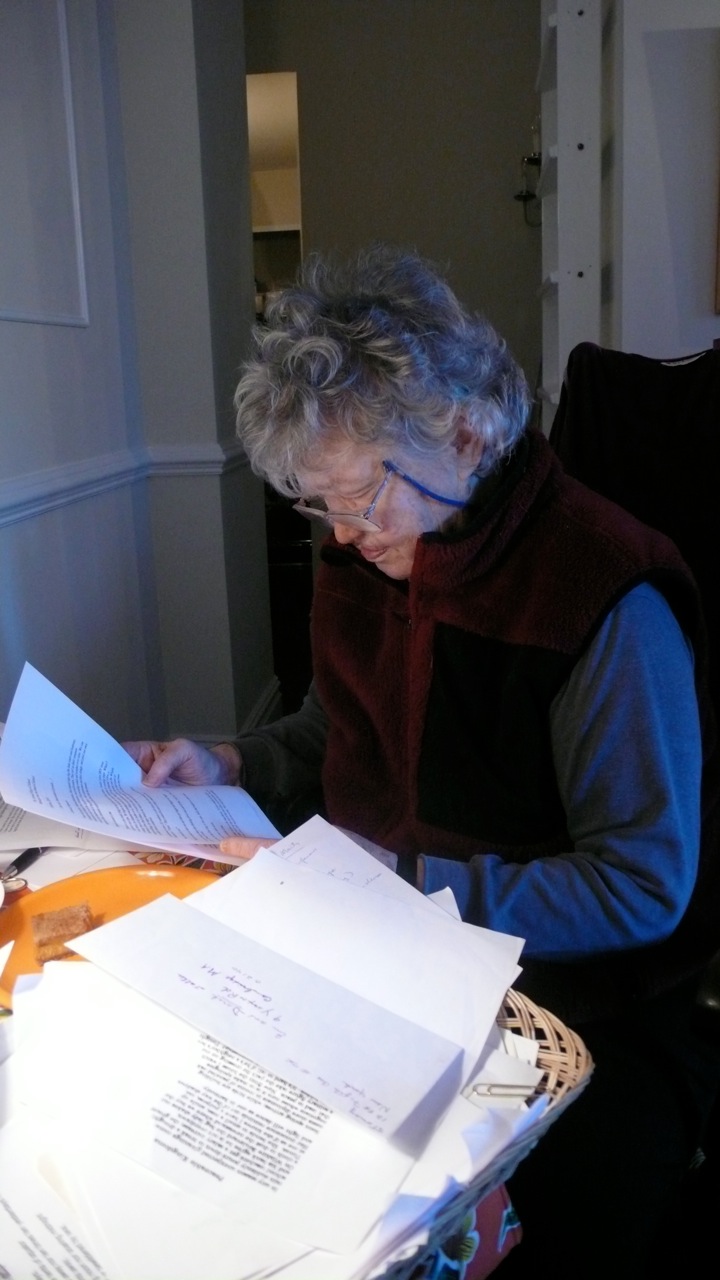 This week, our big adventure was the haircut! 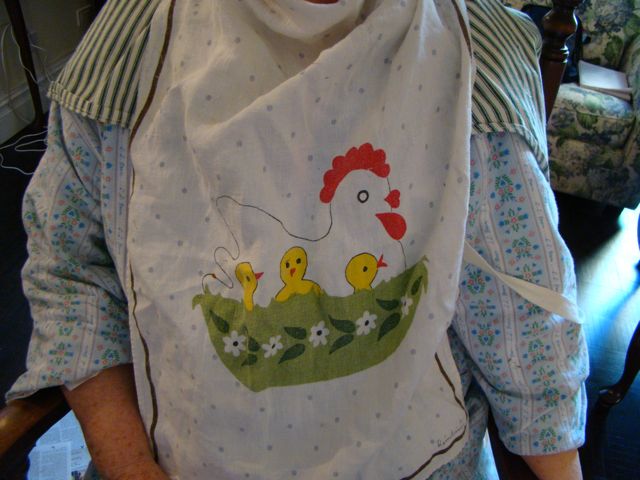 I kind of made it up as I went along, but it occurred to me how appropriate this dish towel was, once I'd gotten it completely covered with hair. My mom was a great mom to my brothers and me - her three little chickens in a row! No matter her own travails and failures, we were absolutely adored and made to feel we could do anything. I am trying to return the gift. 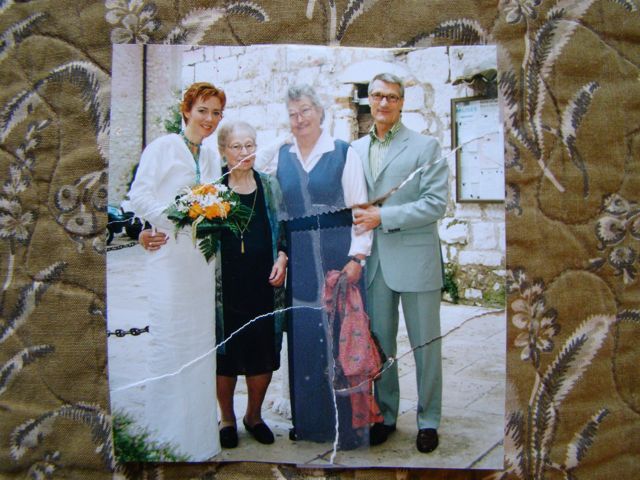 Once in a while, there are things I don't understand... I'm sure she doesn't either at this point. Like yesterday I found a wedding picture of mine, (it had been on her bulletin board) ripped up into pieces and left on the window sill.

On the back, had been a post-it note that got ripped up too... 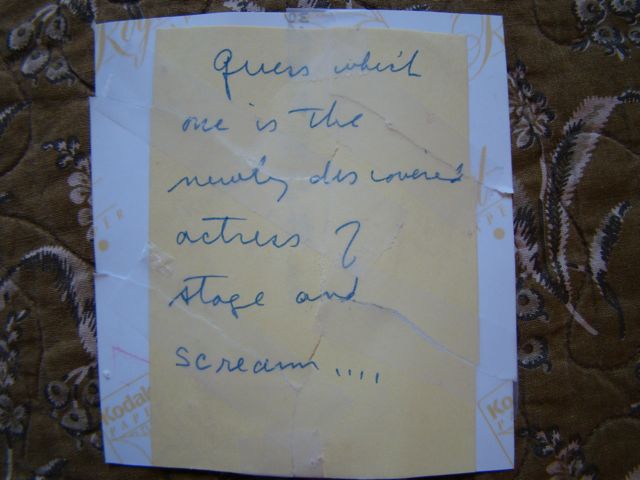 As always she is self-deprecating.  But what I love most is "scream" instead of screen.

Where does this come from? Was she mad at me, and like a four year old, acting out? Can you read anything into things like this, or are you crazy to give it any weight. I'm sure there are books and plenty of people with answers.

I guess I don't need to know. It breaks my heart that we can, even those of us fully cognitive, be reduced to these performances. And so I take it as another lesson, to listen, be more patient, kind. There is a world in there I can't even fathom. And all the world's a stage...

Meanwhile her hair turned out great! 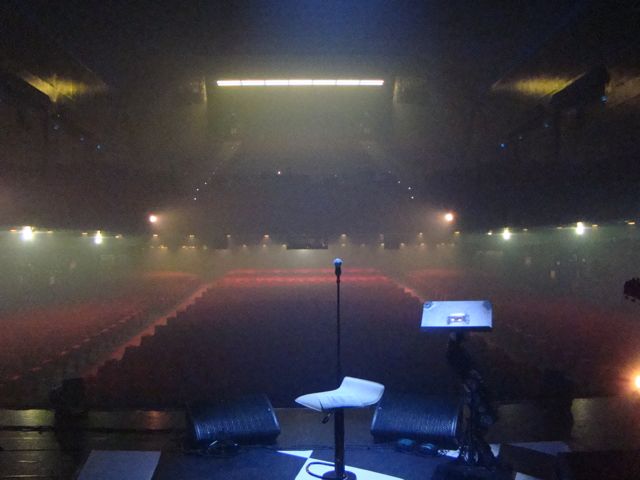 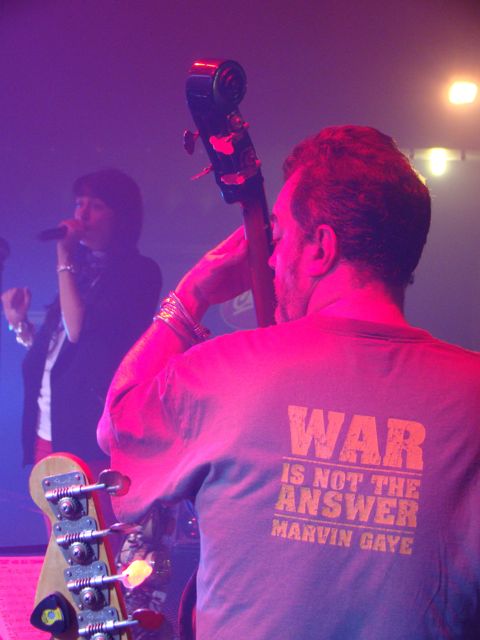 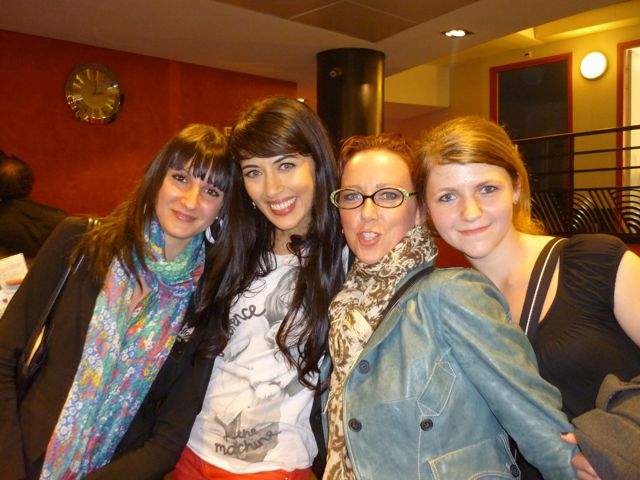 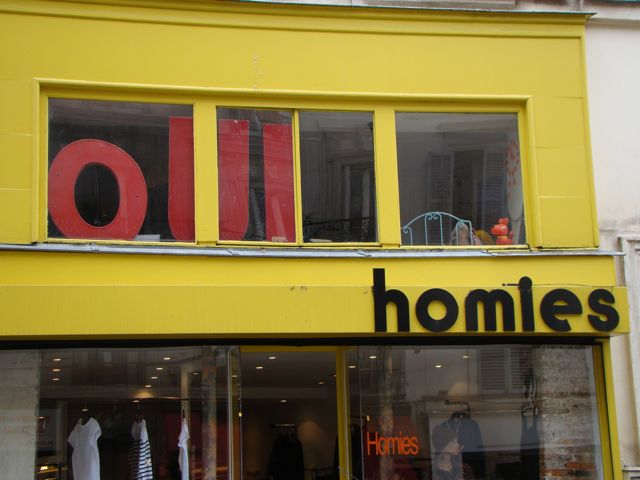 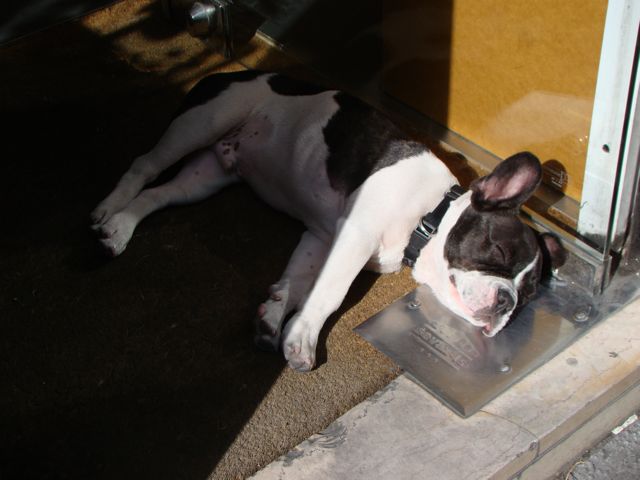 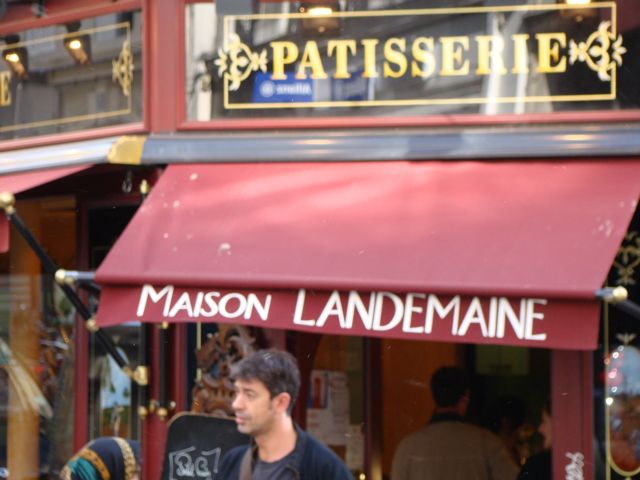 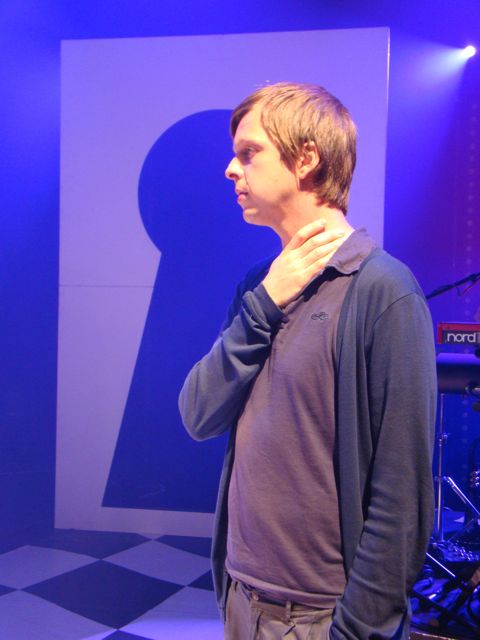 And Sacre Coeur greeted me in the morning. Per usual, the hotel is usually not ready when you arrive at 8, so you get to acquaint yourself with the quartier...

Saw my old haunt from the "steady pull" days...

everything DOES change. n'est ce pas?

lovers at the top of the stairs

dark horse on the carousel

oh, the weight of the world....through a magic fountain curtain.

L'olympia tonight. what a beautiful stage. what beautiful chances I get to see the world from so many angles. And angels everywhere.