JOURNAL
August 2007
Hotter than July, oh my it's August

I suppose the routing wasn't ideal, Denmark, West Coast, Indianapolis, then London, then Pleasantville NY. But the ride was worth it. My pals Derek, Kyle, John and Melissa showed up in Indi. and the aftershow jam/wine/fest was awesome. 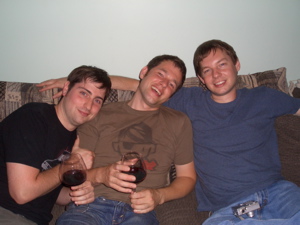 Kyle, Derek, and Big John
We hung out with Joe Hart and Lani Williams who opened up for us. They did some killer versions of Tori Amos songs. The wine flowed, chocolate abounded, we all made it home safe.
Then London. Ok it's a long way for one gig. But you can't beat the Brits. Full on fun and loveliness. I'm always flattered by the preponderance of male audience members over there. As always, the beers were a plenty, and I got to see two other fabulous acts. Catherine Tran and Paul Steele. 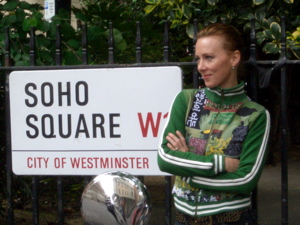 I stayed a few extra days so I could see Tower of Power at Ronnie Scott's. They never fail to rock the house with that ÃÂsweet soul music.' 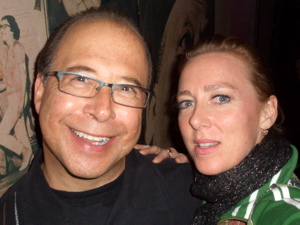 Me and Emilio Castillo, the original one and only! 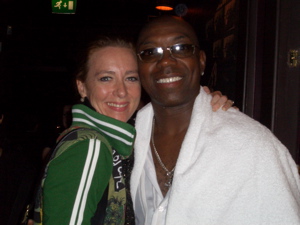 Me and Larry Braggs, the sweeeet soul singer!!

Back stateside...
Pleasantville was a real scorcher. 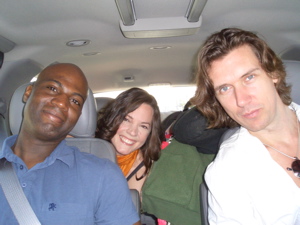 Goffrey, Amanda, Whynot, before the sunstroke

By the time we went on stage I was fully sunstruck, parched and a little bleary. It was a great crowd, but our show remains a kind of a blur. My friend Amanda hawked merch walking through the crowd with a duffel bag, while we tried not to get too sunburned. I do remember wearing a dress and regretting it when the wind kicked up. 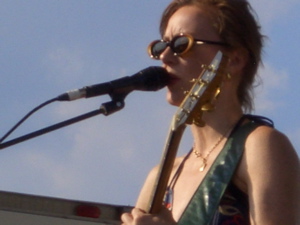 Weehawken, New Jersey has to be the most stunning backdrop I've ever had. It was full on Manhattan skyline at sunset. GORGEOUS. The only drawback was that the geese love hanging out in the little park where we played, so the town handlers (not sure what you call them) had to bag up and truck out TONS of goose poop. They assured us that geese are vegetarians so it won't stink up your rental van on the way home. I loved all the families that came and camped out in the front. We had some wicked interpretive dancers, and only one or two tantrums!

Back at home, the botanical garden is in full swing. I have no idea what all these flowers are called, but the colors and contrasts are just breathtaking, and it seems like every week some new beauty is exploding into bloom. 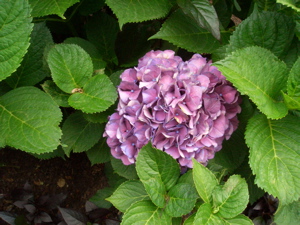 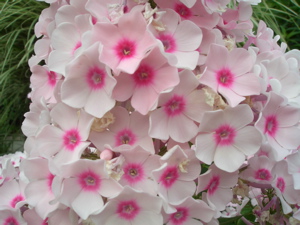 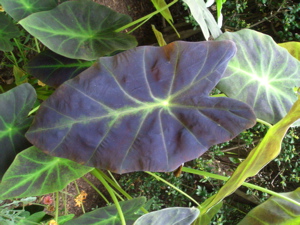 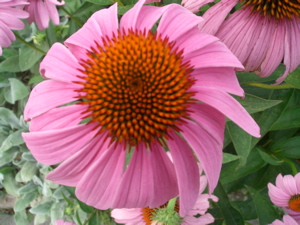 On the way to Amagansett last week, we got the chance to go swimming before sound check. My friend Deborah was super generous with her pool. Whynot found a new hat in the blow up pool toy. 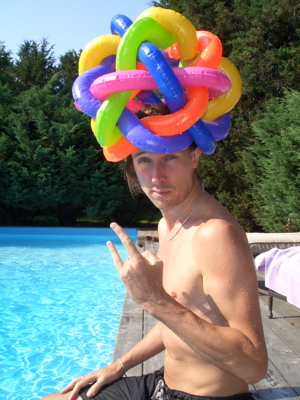 That weekend was a real high for me. I'm so lucky to play with my guys. The shows felt particularly groovy and greezy. Amagansett is a real dive, but it's always rocking fun. Ridgefield was a gorgeous little theatre in a gorgeous little town. Foy Hall in Bethlehem was a sanctuary in the middle of a town of craziness. Apparently Ludakris was also playing that night. So it was a little hairy getting our SUV out thru the throngs of pumped up fans. We lived to tell the tale.

It broke my heart not to have more gigs right away. Just when you're really getting into a rhythm.... We'll have to wait until august 16th in BOSTON. It's free and it will be fabulous. Matt Nathanson is also on the bill, and I hear great things about him.
One last thing. I don't know when or if we'll get a chance to actually make t-shirts, but for those of you who have come to shows recently and heard the story about my drummer misunderstanding "ten cent wings" and hearing "tits and wings" insteadÃÂ.. I started asking people in the autograph lines to draw chickens with boobs. 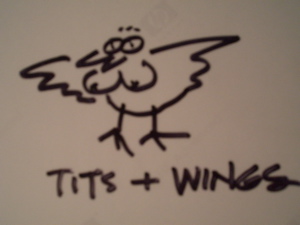 version one, from Portland, Oregon. 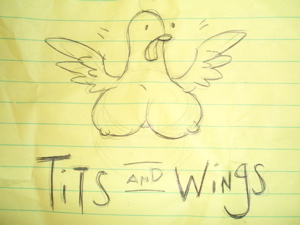 I think they're hysterical. Would you buy a t-shirt? We could keep the logo small!

See you in Boston. Pray for sun, but not 110 degrees like last time we played Copley Plaza!!!